Who's who in the 23-strong Limerick hurling management 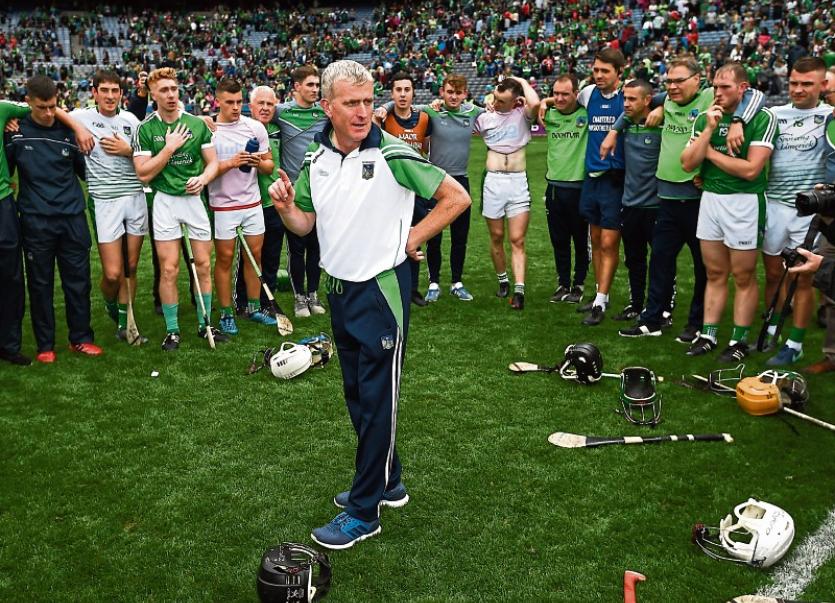 John Kiely was a member of Tom Ryan’s Limerick senior hurling panel for the 1994 and 1996 All Ireland SHC finals but he never played senior championship hurling. In 1998 he won an All Ireland IHC title with Limerick as a corner back.

With Galbally he won Limerick SFC titles in 1994 and 1997 and then captained the Limerick footballers in 1998. On the club hurling scene, with Garryspillane, he won a 2005 Limerick SHC.

Principal at Tipperary Town’s Abbey CBS, Kiely was Limerick intermediate hurling manager in 2010 and 2011. In 2011 he was selector/coach when Limerick won the Munster U-21 hurling championship under manager Leo O’Connor.

Paul Kinnerk was coach to Davy Fitzgerald’s Clare All Ireland SHC winning side of 2013.

The Monaleen club man came to prominence with the Clare minors, who won provincial titles in 2010 and 2011. Along with joint manager Donal Moloney and Gerry O’Connor, Kinnerk was then coach to Clare three-in-a-row of All Ireland U-21 winning teams of 2012-14.

While he departed the Clare senior set-up in 2015, he returned for 2016, when sharing coaching duties with Donal Og Cusack.

On the field of play the former Ardscoil Ris student has won two Limerick SFC titles with Monaleen.

He made his Limerick senior football debut in 2011 and was part of the panel until 2013 – winning a Division 4 league medal in Croke Park in 2013.

Joe O’Connor is a Rathkeale native who operates as a fitness consultant at his own Nisus Fitness.

He was strength and conditioning coach to Davy Fitzgerald’s Clare All Ireland winning side in 2013, when he worked alongside Kinnerk.

Prior to that O’Connor had worked with the Waterford hurlers and Kerry footballers.

He played hurling and football with St Marys Sean Finns at underage level but was always an accomplished athlete. He also appears as Fitness and Performance Expert on RTE's hit show Ireland’s Fittest Family.

Ardpatrick native Jimmy Quilty was a selector with Kiely at U-21 level and was part of the backroom team in 2009 when his native Blackrock won the Limerick, Munster and All Ireland club JAHC titles.

Monaleen’s Brian Geary only retired from inter-county hurling in November 2012.

He made his senior championship debut in 1999 against Cork and in total played 45 times for Limerick.

On match days Geary assumes the roles of water carrier allowing him instant access to players on the field.

Alan Cunningham from Wolfe Tones of Shannon is a former Clare and Offaly senior hurling coach. In recent years he has combined his Limerick role with his job as coach of the Na Piarsaigh senior hurlers, guiding them to a 2015 All Ireland.

He kept goal on 15 occasions in senior championship for Limerick.

Like Brian Geary he can be seen pitchside as a water carrier.

Caroline Currid has made her name as one of the leading performance coaches across varying spectrums of Irish sport over the last decade.

Also in situ are Kieran Hickey (Galbally) and Conor Reale (Hospital-Herbertstown) who worked with Kiely at U-21 level.

Completing the quartet is Ruairi Maher of Kildimo-Pallaskenry and Denny Ahern of Kilteely-Dromkeen.

Eamon O’Neill and Conor McCarthy could be seen as the glue that combine much together.

O’Neill, superintendent garda in Newcastle West, guided Ballylanders to a Limerick SFC title and is a former Limerick U-21 football selector under Tom McGlinchey. O’Neill worked alongside John Kiely at U-21 level.

McCarthy was liaison officer under manager TJ Ryan in 2016 and John Kiely retained him.

Ger O’Connell of Pallasgreen drives the Cavanaghs of Charleville sponsored Kit Van and will be the first man to training and match venues and the last to leave.

His attention to detail has seen him remain in the role through many Limerick management changes.

James Ryan is the team doctor, Adrian Kearns is the Sports Massage Therapist, while the physios are Mark Van Drumpt and Mark Melbourne.