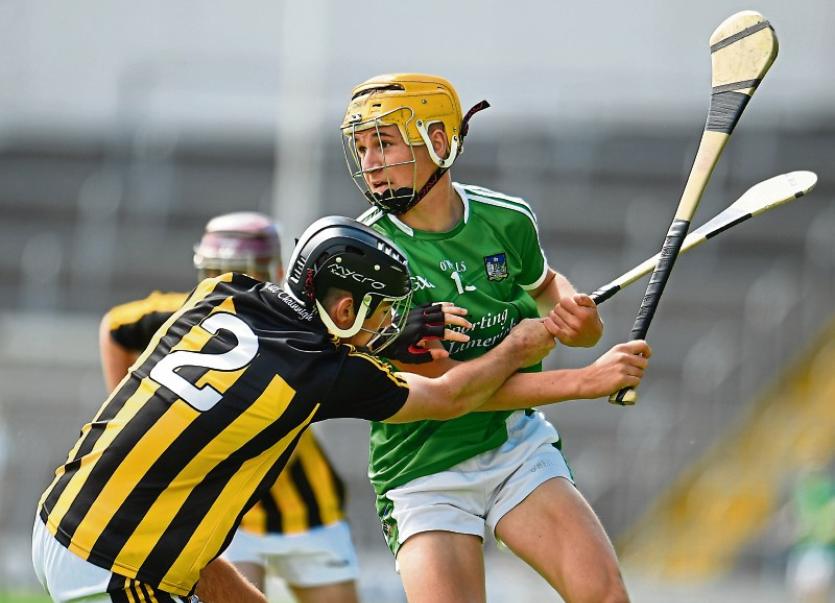 LIMERICK minor hurlers’ hopes of following their seniors into an All-Ireland semi-final were dashed at Semple Stadium when suffering a 3-22 to 1-12 thumping at the hands of a clinical Kilkenny side in their All-Ireland quarter-final played before an official attendance of just 811.

There was nothing to suggest that this would be a facile 16-point victory for the beaten Leinster finalists after the sides were tied 0-8 each four minutes before half time.

However, the complexion of the game changed in the lead up to half-time when Kilkenny stunned their opponents with a run of 1-3 just before half-time to take control.

After the restart, Kilkenny racked up a further 0-5 without reply to effectively book their place in next weekend’s All-Ireland semi-finals.

It was a disappointing end to the seven-game campaign for this young Limerick side which had performed so well through the opening rounds of the Munster round robin series.

Limerick played seven games in all in this year’s minor championship, but suffered defeat in each of their three final outings in the grade. Plenty of experience gained and lots to build on for the coming seasons.

Limerick were backed by a stiff breeze in the opening half, but in a lacklustre opening Kilkenny led 0-4 to 0-3 10 minutes into the half

All three of Limerick’s scores during that opening spell came from pointed frees from sharpshooter Cathal O’Neill.

The quality of the game improved significantly through the second quarter. Limerick notched their first point from play through Emmet McEvoy and just like waiting for the bus for an age in the rain, the second one follows along quickly after the first, as Ballybrown’s Barry O’Connor quickly followed up with another minor from open play.

The sides were level six times in all in that opening half. However, Kilkenny found scores that bit easier to come by during the opening 30 minutes.

Five of their six forwards and one of their midfielders managed tp score from play in their opening period, while Cathal O’Neill struck five points from frees of Limerick’s eight points tally.

Limerick bidding to end a run of successive defeats - to Tipperary in the Munster final and Galway in their round one quarter final clash remained very competitive, thanks to points from Cormac Ryan and O’Neill, frees.

However, the complexion of the game changed in the four minutes before half-time after the teams had been tied, 0-8 each.

Kilkenny stunned their opponents with a run of 1-3 without reply just before the break. Points from Jack Buggy, a Colin Kelly free and Jamie Harkin was followed by a crucial goal from Jack Morrissey.

Limerick retired to the dressing room for the half-time team talk six points in arrears.

Any hopes Limerick may have had of mounting a comeback in the second period were quickly dispelled when Kilkenny continued to add to their scoring tally. In all, the beaten Leinster finalists racked up five points without reply to bring their tally of successive scores to 1-8.

Limerick were reeling. A Cathal O’Neill free in the 44th minute – Limerick’s first score for 18 minutes –finally halted the Cats scoring run, but the damage was done.

Kilkenny free-wheeled to victory with Jack Morrissey netting his second goal in he 47th minute to end any lingering doubt, while substitute Killian Hogan added a third in the 53rd minute.