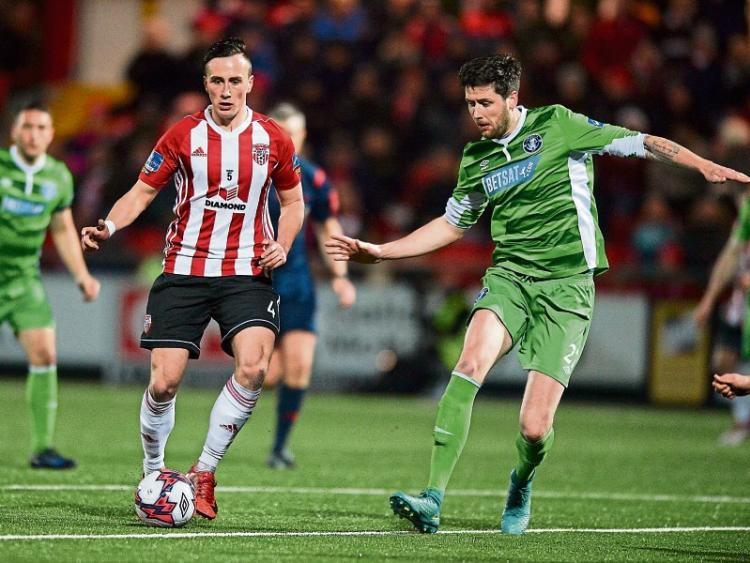 LIMERICK FC boss Tommy Barrett admits it's disappointing to have players leaving during the transfer window, but it has to be done as the Blues cut down on their wage bill.

A total of five players have left Limerick FC over the past week with the opening of the summer transfer window.

A number of additional departures are set to be confirmed prior to Friday's SSE Airtricity League Premier Division clash with Derry City at the Brandywell, 7.45pm.

Second-from-bottom Limerick moved nine points clear of basement side Bray Wanderers with a crucial 2-1 win over the Co Wicklow side at the Markets Field on Friday.

It was just Limerick's second home league win of the season at their first home success at the Garryowen venue in 11 games.

In the wake of Friday night's game, experienced goalkeeper Brendan Clarke confirmed his departure from Limerick, with the shotstopper since confirming his return to St Patrick's Athletic.

Last week, Limerick confirmed that Conor Clifford, Mark O'Sullivan, Henry Cameron and Daniel Kearns were leaving the club with the opening of the summer transfer window.

Tommy Barrett said: “It is not great losing the lads, but it had to be done. We have to make the club leaner. I think we are going about that and doing the right thing.

“In relation to replacing Brendan Clarke, we are looking at a few options. We have Tommy Holland, who is a very good, young keeper here. He has played games in the league as well.

“This is Tommy’s third season playing with the first team, probably played 30 games.

“There may be a couple of more players to leave, but we have spoken to them already, so we know where we are at with that. We are looking at one or two other lads that we are looking to move on before the Derry game (on Friday).

“We might bring in three or four if we can. If we can do that we will. A second keeper is important and we will probably be looking at a couple of other areas on the pitch as well, but they will be young, local talent mainly, local as in the region is what we are looking at.”

Manager Barrett confirmed that the team is continuing to train full-time, despite speculation that they would be forced to go part-time for the final months of the season.

He said: “We are still training full-time at the moment. We have not spoken about anything part-time.

“We are training five days a week like we normally do. For now, anyway, we are full-time.

“Some of our lads are part-time, those in college and that and are off for the summer. We have a couple of part-time players who work as well, we will remain the same for the rest of the season.

Barrett was delighted with Friday night’s win over Bray, a result which boost the Blues hopes of not ending up in the automatic relegation position at end of the season.

“Friday night was a good win for us. Three points was the most important thing and we are delighted with that.

“We are only two points and three points behind the two sides in front of us and as I said the other day, apparently those teams are doing very well, particularly Bohs who are only three points ahead of us and we are struggling.

“Considering where we have come from at the start of the season putting a team together, I think if you said we would be three points off Bohs’ and two off Sligo and nine ahead of Bray with 12 games to go, everyone would have been happy, would have bitten your hand off it.

“I think we have to be positive with that going forward and see where we go from here.”

Limerick have picked up 21 points from their opening 24 Premier Division games this season.

Asked how many more points he felt Limerick would need to pick up from their remaining 12 league games to pull clear of the drop zone, Barrett said: “It is difficult to know. I think between 36 and 40 points will get us probably clear of the play-off.

“40 to 42 points would get you safety. That will be a difficult task, but it won’t be for the want of trying.

“It’s important now to get results. It is not about the performance really. At this stage of the season it is very important that we put points on the board. That is the main thing.

“It gives you confidence when you win a game, like Friday night, of course it does, but Derry is a different challenge.

“It will be a difficult task for us up there. They are a really good side, play really good football and are really good at the Brandywell.

Meanwhile have been drawn away to Buncrana, Co Donegal-based Cockhill Celtic in the opening round of the Irish Daily Mail FAI Senior Cup.

Limerick junior soccer side Pike Rovers have been drawn away to SSE Airtricity League First Division side UCD at Belfield. First round ties are to be played weekend August 12.