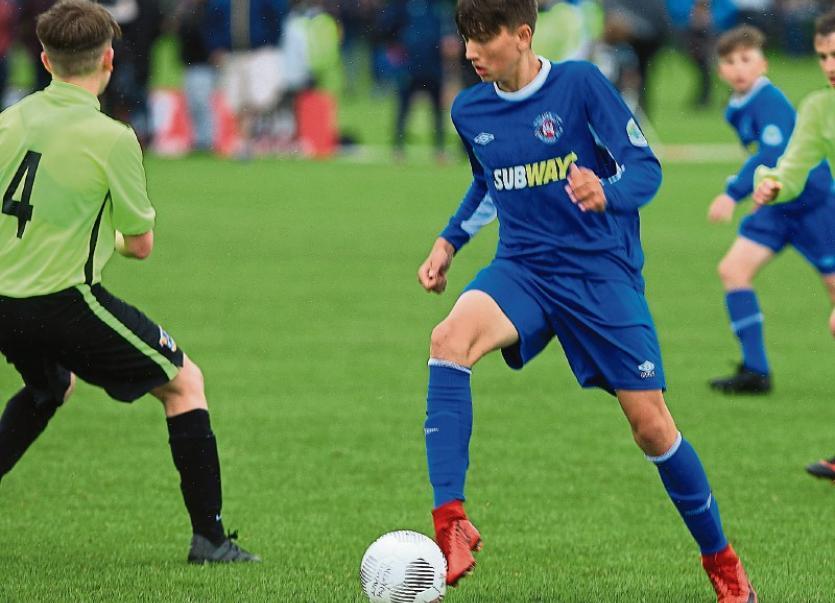 The Limerick and District Schoolboy League had to be satisfied with an eight-placed finish overall after losing out 4-3 on penalties to Dundalk in their play-off game.

Limerick County Schoolboy League claimed a 12th place finish at the 32-team U-14 inter-league event after suffering two penalty shoot-out losses on Thursday, 5-4 to the Kilkenny League and later 6-5 against Clare.

Limerick District suffered a 5-1 defeat to an impressive Cork side in their Plate semi-final at lunchtime on Thursday.

Limerick looked flat on the back of their Kennedy Cup quarter-final defeat to Kildare on Wednesday evening and playing into a strong wind in the opening half fellow 5-0 behind by the break.

A goal from Leon Kirrane, of Aisling Annacotty, at the start of the second half gave Limerick some hope, but the Leesiders, somewhat unlucky to lose to the DDSL in their quarter-final, held their hosts at bay to prevail.

The defeat left District to face Dundlak in the 7th-8th place play-off on Thursday evening. After a scoreless opening half, District hit the front through a goal from Evan Torpey-Barry, of Fairview Rangers.

WATCH: Limerick District lose out 4-3 in penalty shoot-out to Dundalk despite some nerveless spot kicks to finish in 8th place at @SFAIreland Kennedy Cup at UL #LLSport @Limerick_Leader #KennedyCup pic.twitter.com/TSJy6ENJp0

Dundalk, however, equalised to send the tie to a penalty shoot-out. District’s hopes looked over when the first three penalties were missed, only for the local side to fight back to draw level in the shoot-out. However, the Co Louth side ultimately prevailed, 6-5.

Meanwhile, Limerick County, who had beaten Kennedy Cup finalists Kildare in their opening group game, lost out 5-4 to Kilkenny after a penalty shoot-out in their Kennedy Bowl semi-final. The sides had finished level 0-0 at full-time,

The defeat left Limerick County up against local rivals Clare in the 11th-12th place play-off. Clare led 1-0 at half-time. However, Cathal O`Mahony, of Galbally United AFC, struck for a deserved equliser for County to send the game to a shoot-out.

However, for the second time in the space of a few hours, County suffered shoot-out frustration, this time losing out 6-5.

Limerick District and Limerick County have now completed their Kennedy Cup campaigns for 2018.

Meanwhile, the Limerick Desmond Schoolboy League advanced to Friday’s Shield final at the Kennedy Cup on Friday when securing a 1-0 semi-final win over the Mayo League on Thursday morning.

Cian O’Carroll, of Granagh Utd, scored the only goal of the game in the second half as Limerick Desmond set up a Shield final showdown with the North Dublin Schoolboy League at UL at 11am on Friday.

Victory for Desmond will also secure a 17th place finish in the prestigious tournament for the West Limerick side.

The Kennedy Cup final on Friday afternoon, 3.30pm, at UL, will feature holders, the Dublin and District Schoolboy League and the Kildare League.