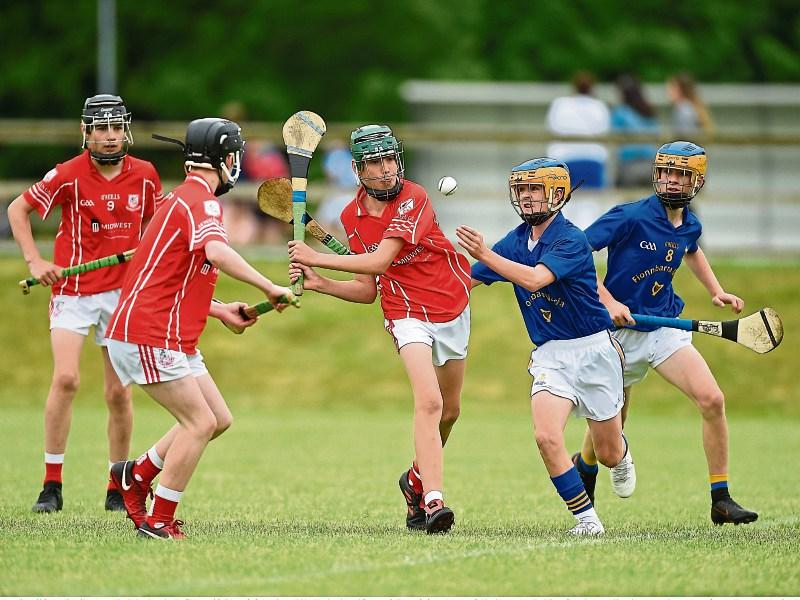 Monaleen's Mark Field gets his side on the attack in their John West Féile na nGael Division 1 Shield semi-final played at the Connacht GAA Centre, Ballyhaunis, Co Mayo, on Sunday

LIMERICK'S remaining representatives completed their Féile na nGael fixtures in Connacht on Sunday as the curtain came down on a bumper weekend of hurling and camogie action played over three days.

Limerick’s representatives in Division 1, Monaleen, bowed out at the semi-final stage of the shield competition at the Connacht GAA Centre in Ballyhaunis.

Monaleen succumbed 3-5 to 0-3 to Cork champions St Finbarr’s who went on to win the competition scoring an impressive win over Waterford’s Ballygunner in the final Monaleen had trailed the ‘Barrs 2-0 to 0-2 at half-time, despite dominating possession for the majority of the half.

Monaleen’s hosts Turloughmore, of Galway, who had defeated the Limerick city side by just three points in their group fixture, 0-6 to 0-3, claimed the weekend’s top prize, the John West Féile na nGael national Division 1 Cup when overcoming Durlas Og, of Tipperary, in the decider.

In the Division 6 Cup competition, Cappamore came agonisingly close to lifting an All-Ireland title before losing out to Clonea, of Waterford, 4-4 to 3-4, in a thrilling final in Duggan Park, Ballinasloe on Sunday afternoon.

Cappamore had earlier defeated JK Bracken’s, of Tipperary, convincingly, 3-5 to 0-1 in the semi-final at Padraig Pearses, of Roscommon.

In Division 3, on Saturday, Kilmallock, who had won each of their three group fixtures in an impressive showing, suffered a four-point defeat, 2-5 to 1-4, to Emeralds, of Kilkenny, in their Cup quarter-final at Duggan Park.

Meanwhile, in the camogie, in Division 1, Limerick champions Newcastle West lost out to Shamrocks Camogie of Galway 0-7 to 0-4 in their shield semi-final on Sunday.

In Division 3, Blackrock-Effin lost out to Kinvara, of Galway, 5-4 to 3-2 in their Cup quarter-final on Saturday afternoon, despite a gallant display. The Limerick side trailed by four points at the break, 3-3 to 2-2, in a thrilling game.

Finally, in Division 7, St Ailbe’s lost out to Ballynastragh Gaels, of Wexford, 2-6 to 1-4, in their Cup quarter-final also on Saturday.