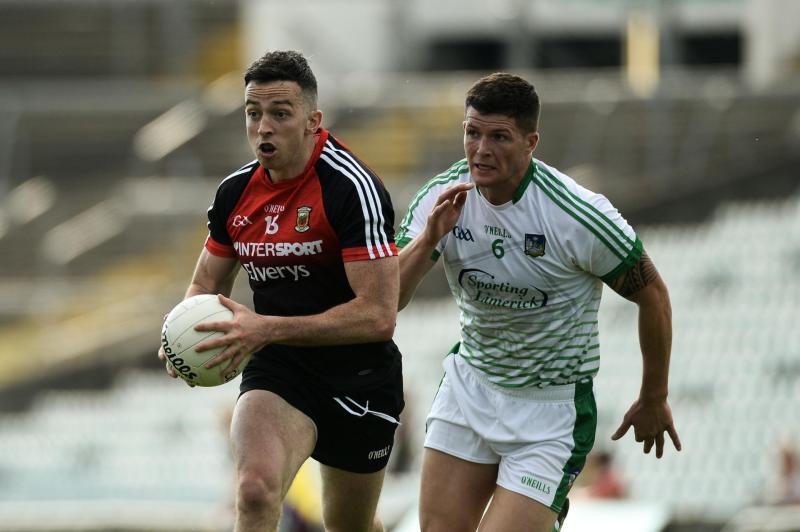 Evan Regan of Mayo in action against Iain Corbett of Limerick during the GAA Football All-Ireland Senior Championship Round 1 match between Limerick and Mayo at the Gaelic Grounds Pic: Sportsfile

Joel Slattery in the Gaelic Grounds

LIMERICK are out of the Senior Football Championship after suffering a hammering at the hands of Mayo in the Gaelic Grounds, losing 5-19 to 3-7.

The loss caps off a poor season for Billy Lee’s men who are without a Championship win since 2016.

A hat trick from Cillian O’Connor and two goals from Andy Moran ensured a routine win for the Connacht men in front of 8,230 spectators.

Limerick got off to a perfect start when they were awarded a fourth minute penalty. After a blistering run from Paul White, Danny Neville was fouled.

However, Mayo remained calm and through a set of points from Cillian O’Connor, were level by the ninth minute in this game which was played in glorious conditions with a huge travelling support from the west of Ireland.

An O’Connor ’45 gave the visitors the lead before James Durcan, a late inclusion in place of Andy Moran, finished off a fine team move to double their lead.

Iain Corbett, Jim Liston and Oola’s Josh Ryan came in from the side who lost to Clare in the Munster Championship and it was Corbett who got Limerick’s first score from play after 19 minutes, to keep Billy Lee’s men in touching distance.

However, on the half hour mark, Mayo hit the net to put them in cruise control. Some sloppy defending from a long ball put Evan Regan through on goal. He hand passed across the square to O’Connor who gave Limerick ‘keeper Donal O’Sullivan no chance from six yards out.

Defenders Chris Bennett and Colm Boyle added fine scores just before the break as Mayo had a 1-10 to 1-1 interval lead.

Darragh Treacy got a fine score just 23 seconds after the restart but Mayo responded with three in a row after this effort.

Limerick kept fighting and through Josh Ryan (free) and Danny Neville were able to keep the scoreboard ticking.

The home side then hit their seconds goal through substitute Seamus O’Carroll. After collecting a long-range pass, the Castleknock man blasted past David Clarke in the Mayo net.

Any last remaining hope Limerick had was evaporated with eight minutes to go as O’Connor netted his second close-range three-pointer to put Mayo  2-17 to 2-6 ahead.

Within 90 seconds Mayo had the ball in the net two more times. O’Connor completed his hat trick before becoming the provider for Andy Moran who completed the rout.

The fact that Stephen Rochford was able to spring Lee Keegan, Andy Moran and Jason Doherty from the bench into the fray in the second half, emphasising the gulf in class.

With 70 minutes on the clock, Moran got a second goal to complete the 18-point win.

Limerick fought to the bitter end, and with the last kick of the game, O’Carroll scored a penalty for his second goal of the game but it wasn’t Limerick’s day.