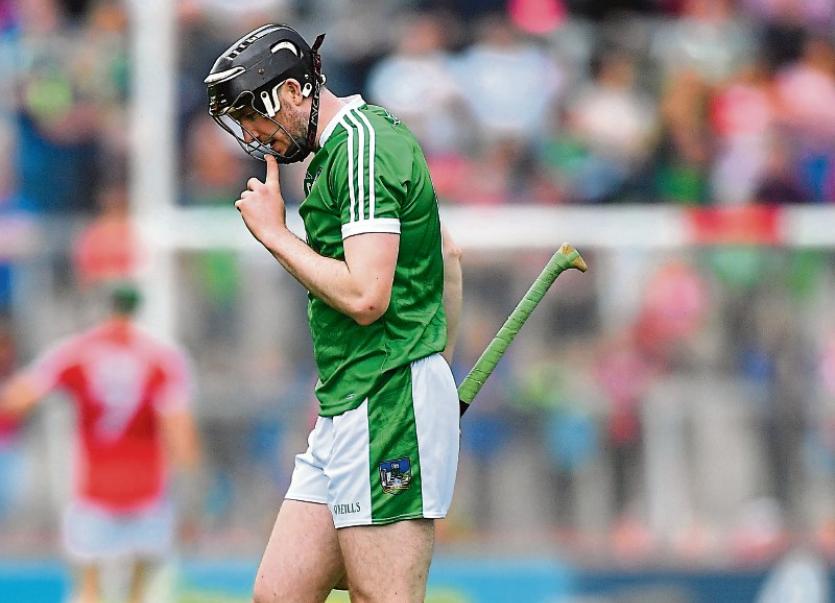 LIMERICK hurling captain Declan Hannon is back in training after overcoming a “tummy bug” that forced him out of the Munster SHC draw with Cork after just six minutes.

The Adare centre back will be back in contention to lead Limerick in Sunday’s Munster SHC tie with Waterford in the Gaelic Grounds.

This Tuesday evening, Limerick manager John Kiely revealed that Hannon and other members of the Limerick panel were stricken down with a “tummy bug” in the days prior to the Pairc Ui Chaoimh encounter last Saturday.

“Declan is fine – Declan was sick. We had an issue last week with a tummy bug in the camp. A number of players and management and backroom team had it. It was just one of those things and what do you do – we had to cope with it and get on with it and that’s what the players did,” outlined Kiely at the weekly Limerick hurling media briefing in the Gaelic Grounds.

He added: “Declan is training tonight and we have 36 fit players tonight.

“Luckily it was early in the week so we had a couple of days clear but at the same time we were concerned that fellas could have been brewing it or in the process of brewing it – we don’t know if it was something we ate or something we just came across.”

Kiely explained: “He (Hannon) wasn’t really happy with the warm-up and had flagged us that he wasn’t really feeling great. We said give it five or 10 minutes to see how you are but he just hadn’t the energy. He has had two good days and is flying and ready to go now”.

The Limerick manager also confirmed that star forward Aaron Gillane would be accepting his suspension, without appeal.

However, he is yet to receive confirmation from Croke Park.

“We don’t know yet – obviously everything is a day late because of the Bank Holiday weekend. We will find that out in due course. He will just have to serve his suspension and that’s it and come back and go at it again for himself,” said Kiely.

Gillane was red carded 10-minutes before half time after an off the ball altercation with Sean O’Donoghue as they awaited a line ball.

“He will have a lot to prove when he comes back and a lot of hard work. He will have learned from it – he is going to get a lot of attention now because he is a marquee forward and he was always going to draw attention in that regard as every corner forward does from a full back line. It’s part and parcel of the game – he reacted and he shouldn’t have reacted,” said Kiely.

“I am hoping it will be a one game suspension – he has a very good disciplinary record. He has’nt ever been sent-off before and I think that will stand to him. It wasn’t a vicious belt – it wasn’t the worst belt in the world.”

One option to replace Gillane would be Peter Casey, who returned to training last week after two months out injured.

“We will see how he is going in training – all the panel are being constantly reviewed on a weekly basis as to where they are at. We are constantly looking to see if there is a player hitting form that we could utilise,” said Kiely.

On the back of the round one win over Tipperary and the Cork draw, Limerick are now the 6/5 favourites to win the Munster title.

On Sunday Limerick are the 8/13 favourites to beat a Waterford side that are priced at 6/4 to win.

They can put one foot in the July 1 final with victory over Waterford this Sunday in the Gaelic Grounds. Throw-in 2pm. Indeed a Limerick win and victory for Tipperary over Clare at the same time in Thurles would confirm a final spot for the men in green.

This Tuesday, RTE bosses confirmed that they won’t be televising the Limerick and Waterford game, opting for Clare v Tipperary.

It will be just the third time in the last five years that a Limerick game won’t be live on television. In total 15 of the last 17 Limerick senior hurling championship games have been covered live – just the 2015 and 2016 All SHC Qualifiers against Westmeath weren’t live.

This Tuesday close to 10,000 were already sold for Limerick v Waterford.

Tickets remain on public sale from Centra and SuperValu shops and online from www.tickets.ie