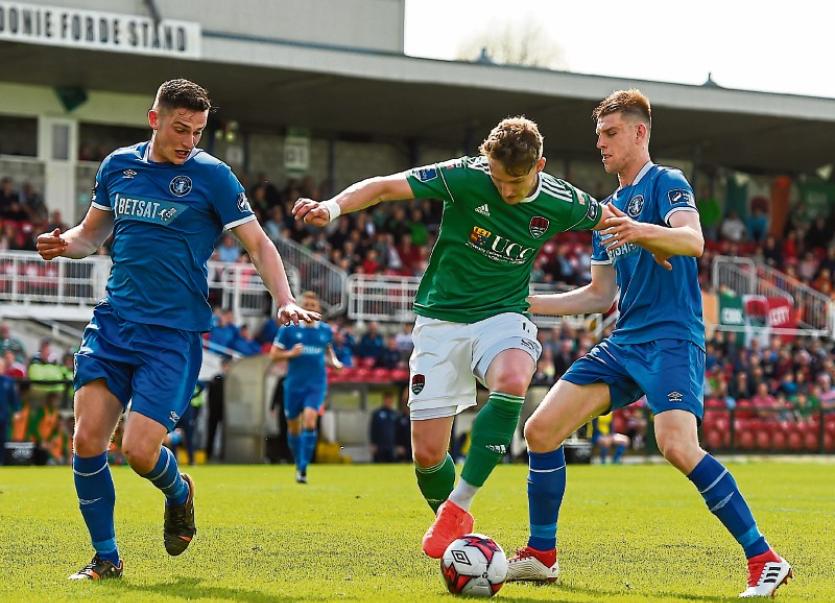 LIMERICK FC suffering a frustrating 2-1 defeat to table toppers Cork City in their SSE Airtricity League Premier Division fixture before an attendance of 3,516 at Turner’s Cross on Saturday.

Limerick took a 1-0 lead, thanks to Danny Morrissey’s superb 33nd minute goal. However, Cork hit back with Graham Cummins bringing the home side level two minutes later, while Josh O’Hanlon headed in the winning goal with 20 minutes remaining.

The defeat leaves second-from-bottom placed Limerick FC six points ahead of basement side Bray Wanderers who have a game in hand.

Limerick are also level on points with eighth-placed Bohemians.

Blues boss Tommy Barrett made three changes to his starting line-up from the team that lost 3-0 to Derry City at the Markets Field on Monday night.

Cían Coleman and Billy Dennehy returned to the starting XI from suspension, while Darren Dennehy was back after injury. The trio replaced Karl O'Sullivan, Alan Murphy and Killian Brouder, who is a late withdrawal with illness which left six substitutes on the bench.

Limerick FC survived a major scare as early as the eighth minute as Cork were awarded a penalty after Steven Beattie was fouled by Cantwell.

However, Blues keeper Brendan Clarke made a terrific save to deny Karl Sheppard putting the Leesiders ahead.

Limerick took the lead on 33 minutes following a superb finish from Danny Morrissey.

However, the advantage only lasted three minutes as Graham Cummins hauled Cork level with a powerful headed goal.

Sadlier’s cross picked out the towering Josh O’Hanlon at the back post in the and his header nestled in the back of the Limeick net for a 70th minute winner for the Leesiders.