'What a couple of days at Adare Manor' - Ivan Morris 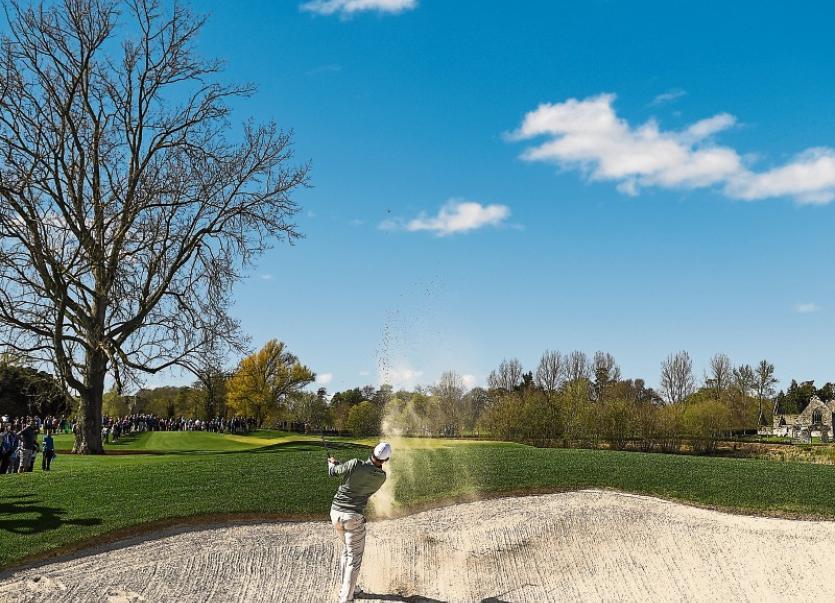 A 'PARKLINKS' is a contradiction in terms but that was how Padraig Harrington, Shane Lowry, Rory McIlroy and Paul McGinley described the new Adare golf course layout after they had finished their exhibition match in the most glorious sunshine seen in County Limerick for many a long day.

All four gave the quality of the course, which is now open for play, the highest praise.

It may not sound like exceptional scoring in a better-ball, stroke play format that the honours finished all-square with a pair of four under par 68s, but the difficult pin positions on the highly-perched, plateau greens made birdies hard to come by. In compensation, there was some exquisite, short game scrambling.

McIlroy reigned supreme from tee to green, but his putter was not co-operating and he did not turn his advantage into a strokes-gained lead.

As a result of their halved match, the participants were able to donate €125,000 to his chosen charity.

The parklinks description was also the consensus amongst the cognoscenti imbedded in the 1500-spectators who paid €100 each to be present. Everyone who paid the €100 entry received a brightly-coloured golf cap which guarantees them admittance to the world-famous JP McManus Pro Am on July 6 and 7 2020.

At a press conference in the Carriage House Terrace Restaurant in the entirely renovated and beautifully-appointed clubhouse, Padraig Harrington assured the media that the world's best golfers will be scrambling for an invitation because the evening entertainment, grand ball and charity auction are that legendary.

The world of professional golf is a small community and the word is already spreading that Adare is a Ryder Cup venue in waiting.

The renovated golf course was always very highly thought of but is now set fair to become one of the world’s most celebrated and want-to-play layouts - even by the very best and most discerning golfers.

It is true that the green fee is comparatively expensive (€340 + extras for an obligatory caddy and cart) but it does cost a fortune to present a golf course in supreme conditioning.

My attitude is simple. It's easy to spend money but spending it wisely and effectively is another matter. Just because ordinary mortals can't afford it is no reason to knock something that the super wealthy can enjoy.

If we are wise we will encourage them to come here from every corner of the globe to part with their millions. At the same time, jobs will be created (e.g. 50 grounds-men work as green-keepers on the golf course) The benefits of trickle down economics should be exploited not spurned.

If one cannot afford the green fee there is another way of securing a game of golf at Adare to enjoy what the course designer, Tom Fazio described as 'the best of the best anywhere' by qualifying as an amateur competitor to participate in the JP McManus Pro Am in 2020.

Thanks to an ingeniously thought out scoring system, golfers will have a unique and eminently fair chance of qualifying for the next Pro Am, while at the same time knowing that their €100 contribution will go to a worthy local cause and secure them admission (as a spectator) to the biggest, richest and best Pro Am in world golf.

With the best two scores out of three at each hole to count in teams that will be randomly drawn after their singles scores is returned and thus eliminating the scourge of 'packed' teams, the honestly-handicapped golfer is no longer at a disadvantage.

My own experience of playing the course on Thursday (the day before the exhibition match) saw me genuinely surprised by how dry underfoot and 'linksy' the course felt and played.

Naturally, I missed a few greens with approach shots to be faced with recovering from the deepest swales I have ever experienced. I did not cope very well, so I asked Padraig Harrington for advice. He said: “It's a Fazio trick to sow confusion! The problem is you had too many options and were unable to settle on one and commit to it.

“You can lob, bump or putt along the ground but you must decide on one of them and stay fully-focused on your choice."

I had some consolation on Friday when I witnessed Harrington overshooting the 9th green. He selected his putter but saw his ball slip off the green on the other side into an even deeper trough, from there he 'lobbed' back and holed the putt for an unlikely bogey.

Adare was always a very good golf course, but the scale of change is staggering. The removal of so many trees and undergrowth 'opens up' superb vistas. Conditioning is everything.

A poorly presented golf course no matter how many fine, natural features it has, is no fun to play. The Adare greens are massive and intricate but even though they were measuring 11-stimps, they were manageable. The bunkers are fewer and deeper, but the sand is light and with firm bases underneath are an 'easy play.' The holes that have been altered most are the 5th, 8th, 9th, 17th and 18th but each has been a clear improvement.

Over 80,000 spectators attended the last Pro-Am event in 2010. Many of the world’s leading golfers came. 2020 will be no different and JP says we may even have that Ryder Cup Match in 2026 to look forward to.