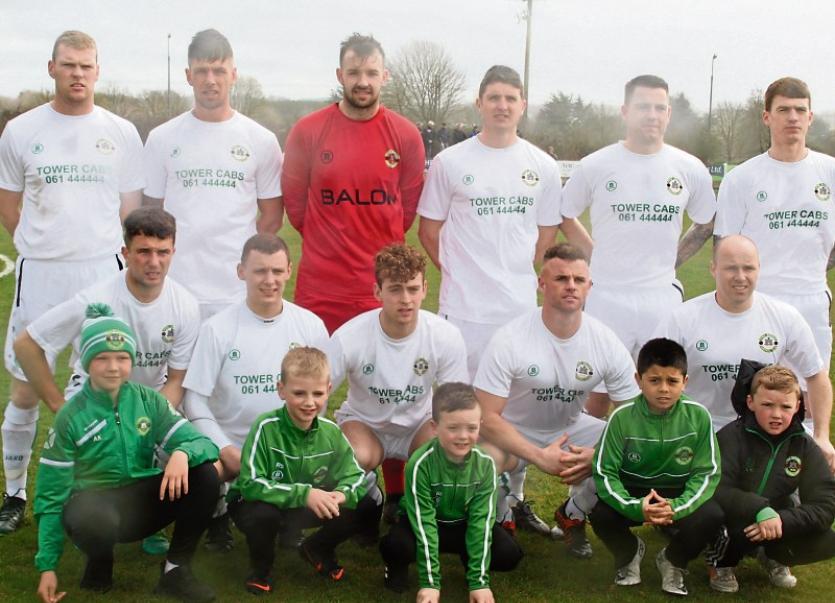 PIKE ROVERS added a Munster Junior Cup final appearance to their already crowded calendar after they fought back from two goals down to pip Killarney 3-2 at the death at the Pike field on Sunday afternoon.

As stated last week, Pike do not do things easy and for the second week running they had their fans on tender hooks until three goals in the final seven minutes turned a defeat to victory in a dramatic game.

Things looked bleak for Pike as the visitors took a two goal lead in the first half but even more worrying for Mike Shiels was the ease with which Killarney keeper Dave Spillane sailed through without having a save to make.

However it was only after the turnover that we became aware of the effect of the wind as Killarney suffered a similar second half with Gary Neville a mere spectator.

The wind spoiled the game really with little or no flowing football on offer but what Pike lacked in poise they more than made up for it with character.

Starting minus a number of 'regulars' Pike struggled early on to make an impression.

The visitors were no much better but when they were awarded a free kick on 18 minutes, Wayne Sparling stepped and curled a shot over the wall and into the net off the upright giving Gary Neville no hope.

Try as they might Pike were unable to get their game going although it took a desperate block by John McDonagh to deny Eoin Hanrahan an equaliser on 20 minutes.

Things got worse for Pike ten minutes before the break when Jason Mullins attempt to clear a dropping ball led to a spot kick as Cathal O'Shea was felled in the box.

Peter McCarthy tucked away the spot kick expertly to send the Kerry side in at the break with a two goal advantage.

Pike brought in Cian Power after the restart and he gave much needed support to Cian Collins.

From the off Pike has Celtic penned into the final third but slack passing by the home side was keeping them safe. A second yellow card for Cathal O'Shea saw the visitors reduced to ten men on the hour mark and thereafter it was like the Alamo for Celtic.

The manager pulled off a masterstroke bringing on the partially fit Pat Mullins and the breakthrough came with seven minutes to play when Steven McGann headed home from a corner kick.

Thee minutes later and Power's delivery from another corner saw Pat Mullins rise above all to powerfully head home from six yards.

It looked like Pike had succeeded in taking the game to extra time but things got even better in the final minute.

Good play on the right by Jason Mullins played Cian Collins in behind a defence appealing for offside and the Pike striker kept his cool to calmly lob the ball over the advancing keeper to send the home fans leaping with joy.

Pike's reward is a place in the decider versus the winners of next weekend's semi final between Janesboro and Newmarket Celtic.

JANESBORO defeated their closest rivals Regional Utd in the top of the table clash to install the Champions as odds on favourites to retain their crown.

A goal in each half from Niall Hanley and John Tierney gives Janesboro a whopping 15 lead with six games left to play.

An evenly fought game was tilted 'Boro's way midway through the half when a clever back heel by Adrian Power put Niall Hanley free in the box and he drilled a low shot across keeper Rob Shier into the far corner.

The crucial second goal arrived on the hour mark when John Tierney took advantage of a wayward clearance to fire to the net.

Victory in four would mean they cannot be overtaken and that is assuming that the chasing pack pick up full points.

Carew Park overtook Regional in second place when they beat a plucky Charleville 5-3.

After a humiliating midweek defeat the Cork lads showed plenty of character despite ending empty handed.

An own goal, Darragh Rainsford, Keegan Park, Gary Griffin and Jamie Kelly accounted for Carew's goals while Pat O'Callaghan replied with a hat trick for Charleville.

Kilmallock paid the price of fielding a below strength side as they fell to a whopping eight goals against a bang in form Nenagh side.

Prospect Priory need four wins from their final six to be crowned Champions following a 3-1 win over Aisling on Saturday evening.

Goals from Craig McMarlow, Darren O'Sullivan and Trevor Hogan did the business.

Geraldines recorded a superb win at Cappamore to take over second place. Kevin Barry, with his 12th goal in eight games secured the points for Dines.

Summerville Rvs slipped up slightly when sharing the spoils with Castle Rvs. Shane Power and Evan O'Grady scored for the homesters; Ian Long and an own goal accounted for Castle scores.

Fairview Rgs B fell at home to Murroe and goals from Darren Duggan and Liam Quinn while Mungret hit Knockainey for five through Jay McKillican (3), Keith Storan and Yakuba Yabre

Granville Rgs are putting a good run together at the right time as they shared the spoils with Corbally Utd. Ollie Kenny and Darren Hanley scored for their respective sides.

In the Calvert Cup Division 1B leaders Coonagh beat Athlunkard Villa in a good tussle.

Darren Roche, Manni Ajuong and Eoin O'Riordan scored for Villa but a hat trick from Mark McGrath and a double from Joey Sheehan won the day.

A second successive hat trick by Barry Gibbons helped Southend to a 4-1 win over St Pats Shane McGrath also netted for the winners.

James Thompson and Sean Ryan scored to give Newport a 2-0 win over Caherdavin Celtic while Hill Celtic edged out Shelbourne by the odd goal in five. Liam Morris and Jack O'Donovan scored for Shels but a John Corbett brace and one from Dan Malone put Celtic through.

A hat trick from Aidan O'Brien put Hyde Rgs into the Lipper Cup semi final at the expense of Corbally who had scores from Billy McNamara and Bobby O'Mara.

Geraldines B are in the final following a 1-0 win over Charleville. David Considine scored the only goal.

In the Div 2B Cup Conor O'Leary scored the only goal as Mungret edged out Holycross while in the Div 3A Cup Prospect beat leaders Caherdavin 2-1.

In Division 4 newly crowned League Champions Coonagh B were knocked out of the cup after a penalty shoot out with Dromore. Billy Connors and Shane Byrne traded goals before penalties were called for.

Balla scored a big surprise in the Under 17 Division Three Cup by beating leaders Lisnagry to reach the cup final. Lee Park scored for Lisnagry but goals from Jordon Franklin and Dylan Franklin saw Ball through.

They will meet Shelbourne in the decider after they beat Mungret Reg 4-0. Cian Connolly (2), Matt DeCourcey and Frank Hogan accounted for the scores.

A hat trick from Liam O'Sullivan saw Fairview advance at the expense of Caledonians.

There was plenty of midweek action that had a bearing on their respective Divisions, none more so than Premier League leaders Janesboro who ran riot against an under strength Charleville XI.

Murroe advanced to the last four of the O'Halloran Cup with a 4-0 win over Aisling. Evan Walsh, Liam Quinn, Brian Quinn and David Rainsford were on the mark for the winners.

In Division 1B with Coonagh not in action, Athlunkard Villa and Shelbourne both closed the gap with 2-1 wins over Newport and Hill Celtic respectively.