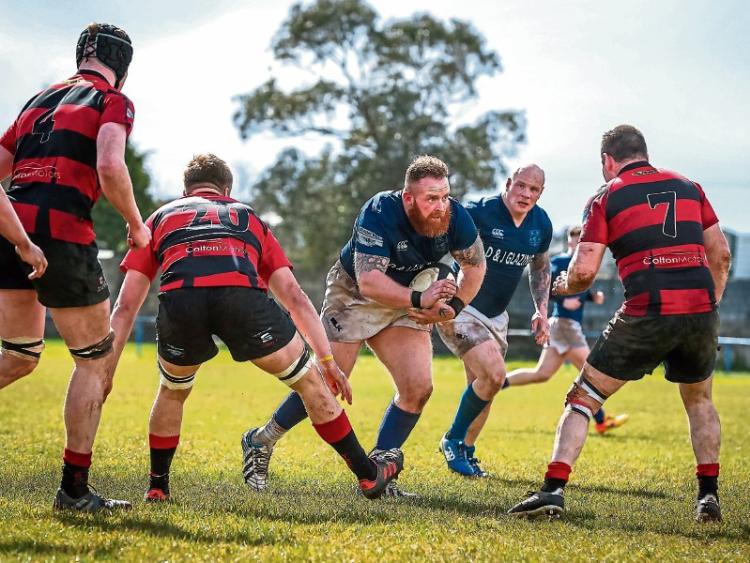 in Division 1A, fourth-placed Garryowen kept their top four play-off hopes very much alive with a crucial 22-10 victory away to relegated Buccaneers at Dubarry Park.

Also in Division 1A, Young Munster’s slim hopes of making the play-offs were all but ended with their 24-27 defeat against high-flying Lansdowne at Tom Clifford Park.

In Division 1B, table toppers Shannon sit in the automatic promotion spot ahead of next Saturday’s final round of regular season fixtures following their hard fought 12-7 win away to Old Belvedere.

Elsewhere in 1B, UL-Bohemian continue to occupy the relegation play-off position in the table, despite an excellent 29-20 home victory over Naas at the UL North Campus.

However, with just three points separating Ballymena in seventh and ninth-placed UL-Bohs, the outcome of which side will face the relegation play-offs in order to try and secure their 1B status for next season will not be decided until next Saturday’s final series of games is completed.

In Division 2B, champions Old Crescent’s bid to go through the season with 18 straight wins came unstuck when the Rosbrien side drew 36-36 with Barnhall.

In the top flight, Garryowen ran in three tries in defeating Buccs’ 22-10 at Dubarry Park.

The win leaves Garryowen one point ahead of fifth-placed Clontarf and five ahead of sixth-placed Young Munster before the final series of games. Garryowen host struggling St Mary’s College at Dooradoyle next Saturday, 2.30pm.

Elsewhere in 1A on Saturday, Young Munsster lost their lengthy unbeaten home record against table toppers Lansdowne when going down 27-24 to the Dubliners at Clifford Park.

Munsters’ would need Garryowen and Clontarf to take nothing from their respective fixtures next weekend as well as scoring a bonus point win away to UCD to have any chance to making the top four this season.

In Division 1B, leaders Shannon have their promotion destiny in their own hands ahead of next Saturday’s home date with UCC.

Shannon enjoy one-point lead over second-placed Ballynahinch and sit two points clear of third-placed Banbridge ahead of next weekend’s date with the Cork students at Thomond Park.

Leaders Shannon scored two tries in their hard fought 12-7 win away to Old Belverdere at Anglesea Road, with Conor Fitzgerald and Ty Chan dotting down. Fitzgerald also converted his own try.

Elsewhere, UL-Bohs remain ninth and in the relegation play-off position in 1B, despite their excellent 29-20 win at home to Naas at UL.

The wind-assisted Red, Rebi Robins led 23-3 at half-time, thanks to first half tries from Darragh O'Grady and Adrian Enright. Out-half Robbie Bourke kicked five penalties and converted both tries.

UL-Bohs sit one point behind Old Wesley and three adrift of Ballymena ahead of the Annacotty side’s trip to promotion-chasing Banbridge on Saturday next.

Ballymena host Old Wesley next weekend so it’s all the play for in the battle to pull clear of the drop zone.

After 16 straight wins in Division 2B, champions Old Crescent, who are already looking forward to life in 2A next season, played out a thrilling 36-36 draw away to MU Barnhall.

Old Crescent led 33-21 at half-time, scoring five tries in the opening period with a hat-trick from Brian Tuohy, while Ronan McKenna and Val McDermott also dotted down.

McKenna added a crucial second half penalty to help the visitors into a 36-31 lead at Parsonstown, before a late try for Barnhall saw the sides finish level, ending Crescent’s 16-game winning run this season.

In Division 2C, second-placed Thomond are edged out of the automatic promotion position on mere points difference by table toppers Sligo ahead of next weekend’s final series of games.

Thomond’s final regular season game is a top-of-the-table clash away to Sligo on Saturday next. The joint-leaders enjoy a four-point advantage over both third-placed Malahide and fourth-placed Omagh.

After a scoreless opening half, Thomond took the lead on 56 minutes with a try from Dave O’Halloran, which was converted by Evan Cusack.

Tullamore drew level with a converted try of their own, before Cusack earned four precious league points for the Limerick side with a successful penalty four minutes from full-time.

Meanwhile, also in 2C, Bruff eased their relegation worries with a crucial 19-6 victory over Bective Rangers at Kilballyowen Park.

The defeat relegated Bective from 2C and handed eighth-placed Bruff a four-point lead over Tullamore who occupy the relegation play-off position in the table heading into next weekend’s final series of games.

Bruff’s final game is an away date with promotion-chasing Omagh.

Bruff led Bective 14-6 at half-time and a further try in the second half helped the South Limerick side close out a precious victory.