Munster warm up for Europe with Pro14 win over Scarlets 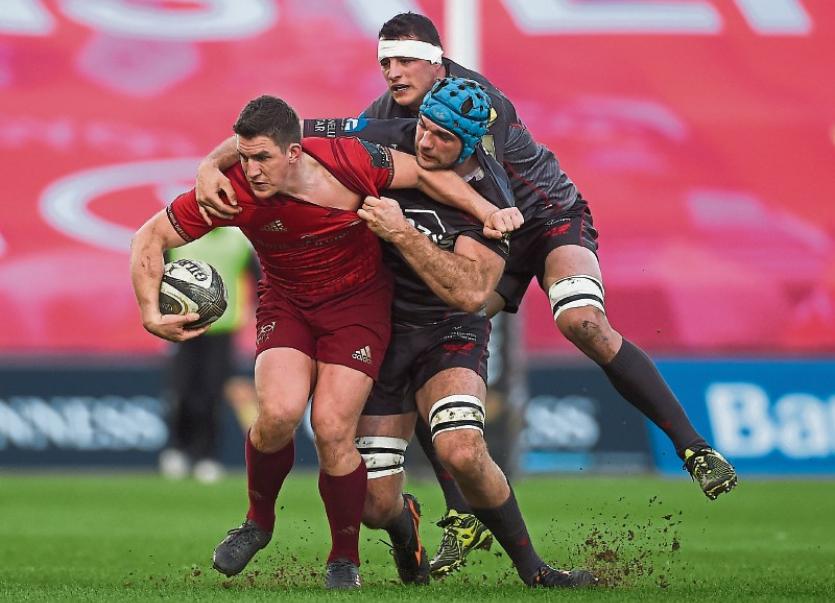 Munster's Ian Keatley is tackled by Tadhg Beirne and Aaron Shingler, of Scarlets, during their Guinness Pro14 fixture at Thomond Park on Saturday night

MUNSTER warmed up for next weekend’s mammoth European Champions Cup quarter-final clash by easing past holders Scarlets 19-7 in their Guinness Pro14 fixture at Thomond Park on Saturday evening.

A highly impressive opening quarter from the Welsh region yielded a try from scrum-half Aled Davies which Rhys Patchell converted.

Scarlets continued to press as Munster struggled to settle into the game, but the home side thought they had drawn level when Wootton intercepted inside his 22 to score.

However, the TMO adjudged that Wootton had knocked on as the ball struck his bicep in the build up to the try.

Munster were within two points at half-time, 5-7, in the repeat of last season’s Pro14 final, with the first of Munster’s three tries coming from scrum-half James Hart.

The home side managed two further tries in the second period from Man of the Match Robin Copeland and winger Wootton in the 78th minute, while Munster held their opponents scoreless.

Munster felt aggrieved to not have another try awarded earlier when James Cronin burst over the try line, but the referee deemed that he was guilty of making a double movement.

The win keeps Munster in second place in Conference A, ahead of next month’s two-game trip to South Africa where they will face the Toyota Cheetahs and the Southern Kings

Munster’s win came at a cost as flanker Tommy O’Donnell was forced off the pitch with an unfortunate injury in the third quarter.