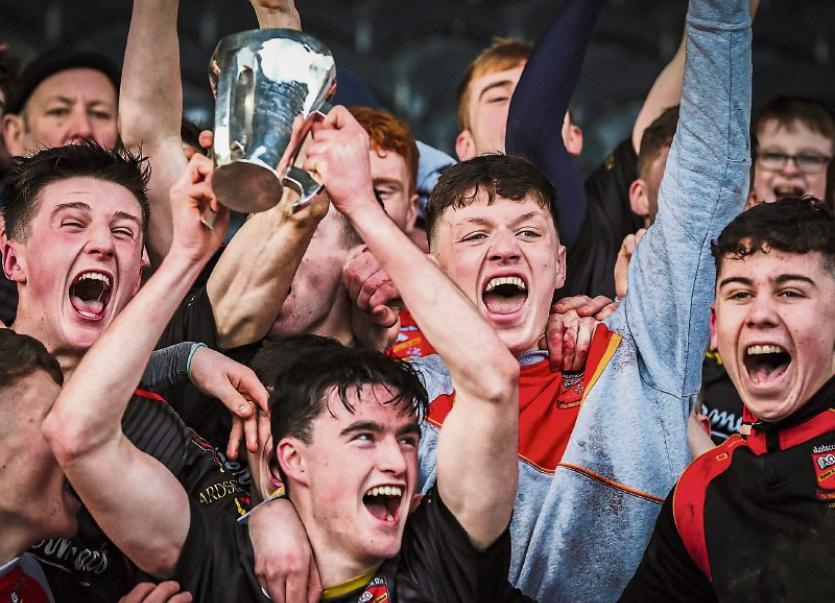 Last Saturday in Mallow, Ronan Connolly captained the Limerick city side to their fifth success in the famed championship that stretches back 100 years.

“Even when I was in sixth class and watching Shane Dowling and Declan Hannon captaining winning Harty Cup teams that was all I dreamed of,” beamed Connolly after accepting the trophy from Munster Post Primary Schools Chairman Liam O’Mahony.

“We are absolutely delighted - to win with this group of lads is phenomenal. Obviously it’s a team game but its a fantastic honour and I am over the moon,” beamed the former Shountrade National School pupil.

Connolly was winning his second Harty medal on the field of play, along with Jerome Boylan and Paul O’Brien and the captain felt that experience was key.

”On the panel today there were five or six who were on the panel two years ago when we won so we had that experience of winning it and that also made us want to win it more. All that helps to get you over the line,” said the Adare teenager.

”Having beaten them by only a point in the group stage, we knew that they were going to come gunning for us. We knew we needed a good start and the third quarter, just after half time, has been an Achilles heel for us all year but we kicked on strong in that. Even when they got the two goals but we bounced back strong to see it out,” he recalled.

Connolly, Boylan, O’Brien and David Woulfe all played in the 2016 All Ireland MHC final with Limerick and are now one win away from a Croke Cup final appearance.

”Hopefully we can push on and try and add a Croke Park to this. This team is special - I feel we can drive on,” said captain Connolly.

Ardscoil Ris manager Liam Cronin believes that the school have created a ‘culture of winning’.

Back in 2008, the North Circular Road secondary school reached their first Harty Cup semi final and they have only failed to reach the last four just once since – losing to Midleton after a quarter final replay last year.

But back came Ardscoil Ris stronger than ever this season and six victories later, they are Munster Post Primary Schools Senior A Hurling Champions.

“We have created a culture - 2010 and 2011 were big years and every year we now get a new group of First Years into the school and it’s about them fulfilling that legacy,” said Cronin, referencing their Harty Cup title break through years.

“It’s a culture we have now - 2005 that was the year that we decided we were going to go after this. We weren’t happy hurling away at ‘B’ level,” he recalled of when the school decided top level hurling silverware was within their grasp.

Two years ago this group won the Dean Ryan – Munster U-16 title – and Cronin felt that experience was among the positives they carried into Saturday’s Harty final.

”Two years ago we beat Midleton in the Dean Ryan semi final by three points and beat De La Salle in the final and therefore at the start of this year many would have said it was Ardscoil Ris and Midleton for this final - even though there was a huge amount of hurling to be played, that’s how it turned out,” explained Cronin.

”That experience they had from winning the Dean Ryan and some of them from playing in a Harty final two years, was something that you saw in that first half - guys had been there before and done the business and there is very little to be said in the dressing room when you have that kind of character and experience,” he said of his players. Ardscoil Ris were seven points clear by half time.

“We were very happy - with a team as good and with as much potential as our guys have, the main focus was just to make sure that we delivered a performance and I felt we did that in the first half. I thought we really played well in that half - almost to script,” he said.

”We were very calm at half time because we were happy with how we had played and it was just a case of going out and doing the same in the second half.”

The new champions went 13-points clear mid-way through the second half but Midleton hit back with two goals before the men in black, red and gold steadied to claim the title.

“We have spoken about that all year - it’s the resilience that the boys have and something that you can’t coach - you either have it or you don’t and they are an absolutely super bunch of guys and play hurling to a level way beyond their years, said Cronin, who is in his second year a Clare senior hurling.