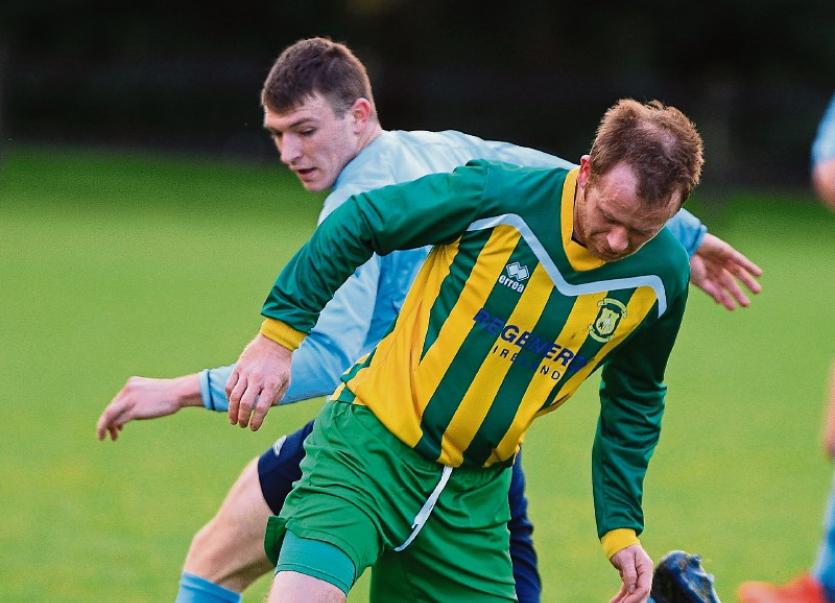 There are three big ties at provincial level at the weekend for Limerick Desmond League sides.

Ballingarry and Broadford United are away to Killarney Celtic and Thurles Town, respectively, in the fourth round (last 32) of the Munster Junior Cup, while the Broadford club have another big game in the Munster Youths Cup, at home to College Corinthians on Saturday at 2 pm.

This game will take place under lights on Saturday at 7 pm. Ballingarry go into the game as Premier Division leaders, having taken over top spot from Abbeyfeale United by impressing in a 2-0 victory away to Glin Rovers last Sunday week. Their scorers in that victory were stalwart Francis Kiely and new signing Seoirse Joyce. Both are expected to be key players on Saturday. A few players have slight niggles but manager Gary Shanahan and his assistants, Mike Ahern and Dara O’Grady, expect to have a full squad to choose from, including their Youths contingent, who contributed so handsomely to the club’s Munster Youths Cup victory against Clonmel Town last Saturday.

Despite losing only one game so far this season, against Shannon Town, Ballingarry will go into Saturday’s tie as underdogs. Killarney Celtic reached the semi-finals of the FAI Junior Cup last season, beaten on penalties by Sheriff. Celtic are going well in the national competition again this season, through to the last 16 after their win against Willow Park in Athlone. In the League, they are joint second behind Killarney Athletic in Premier A, three points behind but with three games in hand, so there’s a strong possibility of a repeat of last season’s League Final, which Athletic won. The Celtic strike force is made of Cathal O’Shea and Danny Roche, with the long-serving Peter McCarthy not having dropped back to midfield.

Broadford United haven’t played a competitive match since their 1-1 draw at home to Glin Rovers at the end of November and that certainly won’t help their ambitions of reaching the last 16 of the Munster Junior Cup. What will help is that the experienced John Paul King and prolific goalscorer Paul Madigan are both now available for action. On the other hand, Dylan Kelly is out injured and he will be a loss.

While Broadford are mid-table, Thurles Town are top of the table in North Tipperary as they seek to defend their League title. They haven’t had any prolonged runs in this competition and so Broadford have the edge on them there, having reached the semi-final last season.

Broadford showed that travelling outside their own League holds no fears for them when they trounced Tralee Dynamos 6-2 in the Kerry District League pitch at the end of September and, with a full team available, they should have what is required to get over this difficult hurdle.

Broadford United will have home advantage on Saturday as they bid to join Ballingarry in the last eight of the Munster Youths Cup as the College Corinthians pitch was deemed unplayable last Saturday. They are four points clear in Youths Division 1, which is not surprising considering that they have scored 32 goals and conceded none in their last five league games. During that run, they beat Askeaton 2-1 away in the third round of this competition.

Sean Kelly has been a big factor in the huge goals tally, as has fellow striker, Martin Daly, while midfielders Kieran O’Flynn and TJ Kelly have also chipped in. The hard-working midfield pair have also contributed to the impressive collection of clean sheets, offering protection to a back four led superbly by centre-half and captain, James Molyneaux. Another player who can take credit for five clean sheets in the last six games is goalkeeper Brian Stack, a brother of Broadford United A-team goalkeeper, Patrick Stack, who is one of two assistants to manager Joe McAuliffe, the other being Denis Daly.

Cork Youths football is strong, as Limerick Desmond have found out with heavy Inter-league defeats in recent years. College Corinthians are in the top flight but they are not setting the Division alight, with one win and five defeats from their six games. Their u-17s, on the other hand, are flying in their league, undefeated with four wins and one draw and some of those players will be travelling on Saturday.

If Broadford play to their absolute best, they might just be good enough to overcome this challenge, with Molyneaux and Kelly likely to be key players.