"I kicked a few fellas in the private areas, but I eventually got the hang of it" - Conor Murray 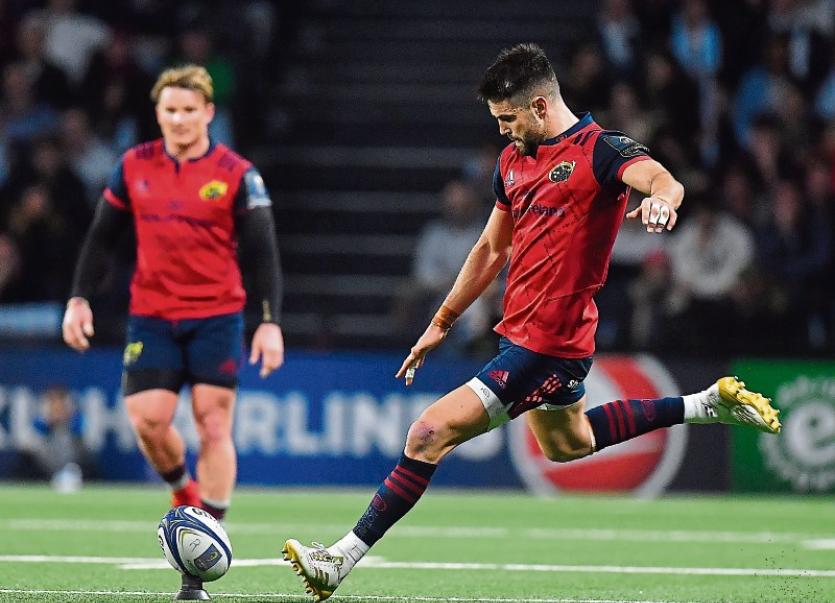 MUNSTER'S scrum half Conor Murray is currently regarded as the best number nine in the World.

The former Garryowen club man has starred for Ireland and the Lions in recent seasons, however it seems the Limerick man is not content with passing the ball from the base of rucks or kicking his now World famous box kicks.

In recent games Murray can be seen being lifted in line outs and kicking at goal.

Indeed, last weekend against Racing 92, Murray landed a penalty kick from inside his own half.

With the Six Nations coming up, Murray was asked this week, if kicking at goal was something he was going to continue to pursue, or what last weekend a ‘one off’

Murray kicked at goal in his time at Garryowen in the All Ireland league and the scrum half can be seen practicing his kicking during pre match warm ups.

Another string added to Murray's bow in recent weeks has been his line out jumping. The Irish star was used more than once in the set piece against Leinster at Thomond Park on St Stephen's Day.

‘Billy Holland and the lads that run the lineout normally come up and ask me something and I normally refuse first off. They then have to convince me to do it. I did it when I was younger at Young Munster, against UCC I think. It came off. Like the kicking at goal, if it something that will help the team, I will do it. It is a bit scary up there. I kicked a few fellas in the private areas when we were practicing, but I eventually got the hang of it. It nearly came off against Leinster, CJ Stander nearly got over and we managed to get over a couple of phases later. As I said, if it is something that helps the team, then I’ll do it’ admitted Murray this week.

When asked where the idea came from and why Munster were looking to mix things up from the more traditional set ups, Murray added that it was down to ‘trying something new’ as the analysis of teams is so vast now.

‘I think defences are so good now and the analysis that teams do on each other these days is massively important and it is really clear when you are going into a game that you have an idea of what kind of moves they are going to play, so if they throw up something different, they might catch a team off guard and that is the plan to try and stay one step ahead of players and teams and try and get the upper hand in whatever way you can’

Murray, a proud Limerick man himself, also offered his thoughts on the passing of Dolores O'Riordan this week.

‘I love their music. I was very used to hearing all of their songs. It is very sad isn’t it. It is very sad for the region of Limerick. It was a nice thing, in our gym session (this week), we have them (the Cranberries) playing for the hour and a half. It is a very sad thing to happen. I don’t know what the circumstances were, but obviously she was quite young and it was too soon, but the legacy she and the others in the Cranberries left is incredible and everyone from Limerick and a lot further afield are very proud of them’