Limerick FC's Shane Duggan: 'Time is ripe for young guns to step up' 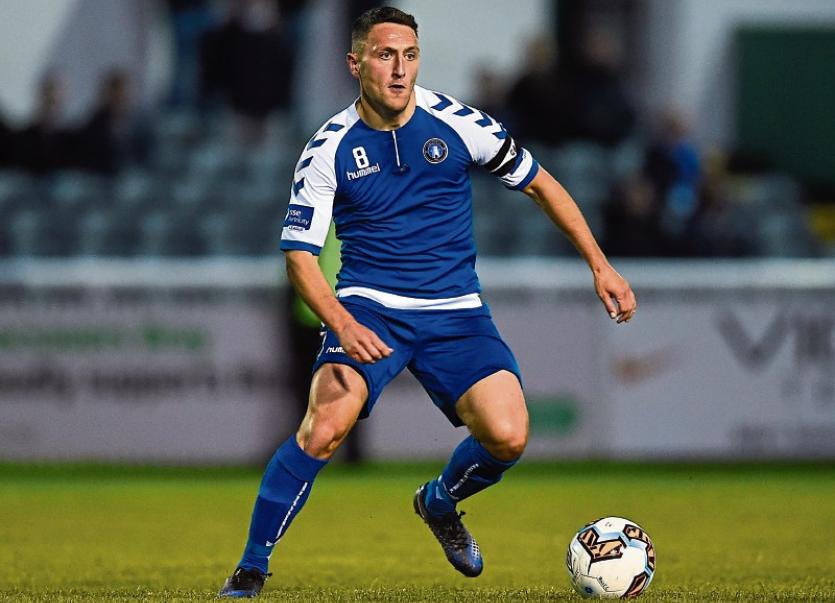 IN a senior career spanning a decade, Limerick FC captain Shane Duggan admits he has pretty much seen all, the good, bad and ugly League of Ireland soccer can throw at him.

From making his debut with Pete Mahon’s UCD side as a 19-year-old, through his time at Cork City which involved a period of huge uncertainty brought about by the club’s financial turmoil at the start of the decade, to relegations and promotions and now, most recently, having a manager quit Limerick on the very day pre-season was due to begin.

Duggan admits Neil McDonald’s departure as Limerick manager came as every bit as much of a shock to the players as it did to the stunned supporters.

Local man Barrett will take charge of the Blues for the first time in a pre-season friendly against Galway Utd on the 4G soccer pitch at UL on Saturday, 6.30pm.

Twenty eight-year-old Shane Duggan has made over 100 league appearances for the Shannonsiders since joining the club in October 2013.

Speaking prior to Barrett’s appointment as manager, Shane Duggan says: “I didn't have a clue beforehand (that Neil McDonald was about to quit). We just showed up for our first day back at pre-season. It was just as much of a shock to us as to everyone else.

“But these things happen in football. Neil was offered a good job back home and he took it. We will just have to move on now as a club.

"I am experienced enough now, I have been around for a few years. In the modern game now these things happen.

“Obviously with a lot of clubs, managers chop and change frequently nowadays and it is something you get used to.

“We have to knuckle down ourselves and make sure we perform ourselves on the pitch.

"It's pre-season and we are in six days a week most of the time. We have to get hard work done as it's less than five weeks to the season kicking off.

“We have to get into the best shape and preparation we can. We haven't the biggest of squads, so everyone has to hit the ground running this year.

"Every year players come and go during the closed season. That is just the nature of football, especially League of Ireland. Up around the Dublin clubs it's a bit of merry-go-round, but in Limerick over the past number of years we have seen a lot of players come and go because not too many of them are local, really.

”We have had more local lads coming through here over the past few seasons.”

While Blues fans will hope there is an influx of senior players into the squad, prior to their Saturday, February 17 opening night SSE Airtricity League Premier Division fixture away to Sligo Rovers, Duggan says younger squad members are going to have to quickly get used to the demands of playing in the top flight.

"It is up to the younger guys to push the senior lads as well. When I first came to Cork City, and I looked around the dressing room, the whole teams was experienced lads, the likes of Joe Gamble, Colin Healy, Dan Murray, these were all really experienced.

"When you look around the dressing room now, around the whole league, you see 17-year-olds and 18-year-olds getting opportunities and back a few years ago they didn't get that.

"It's good and if they are good enough they will step in and take the opportunity because it is the perfect chance for them now.

“We haven't got the biggest of squads, so they have to come through, do the business and show they are good enough to play at this level.”

Duggan said he hoped Limerick FC Chairman Pat O’Sullivan would get the backing he needed to ensure the club can compete strongly in the 2018 season.

O'Sullivan has confirmed last week that he hopes to sell at least a majority share in the SSE Airtricity League Premier Division club.

The Chairman revealed in a Youtube post that he is in discussion with a number of parties at present with a view to selling an interest in Limerick.

Shane Duggan said: "Pat (O’Sullivan) came out with his message and he was honest about where he stands. The man does need help.

“Obviously he has put a lot of money into the club. He has done fantastic things for the club by himself, so hopefully he gets a bit of help that he needs and he might sell a share of it, he might sell the whole thing, I'm not too sure, but I'm sure he has a plan in mind. I'm sure Pat knows what he is doing.

“He has done so much for this club and I don't think he will leave it all slip away now.”