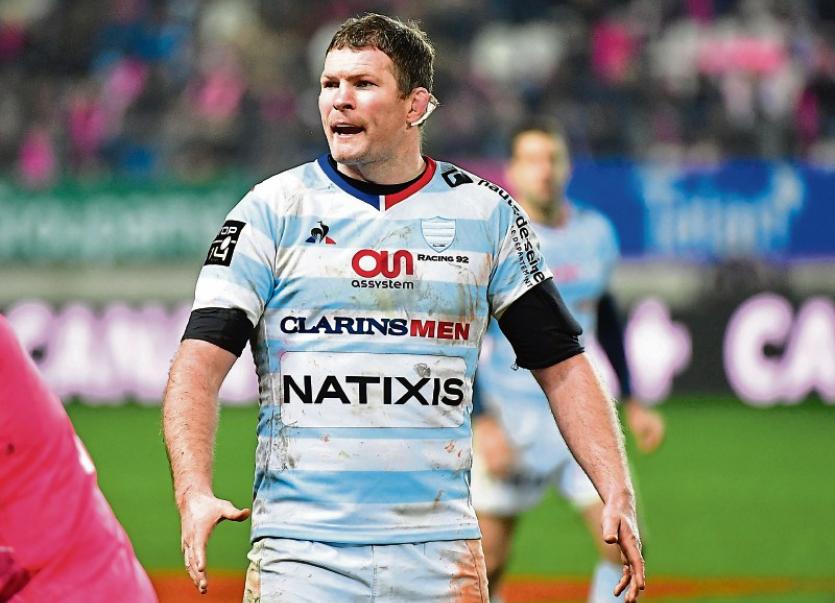 WHEN the Munster players take to the pitch at the magnificent new U Arena in Paris shortly before 3.15pm this Sunday, a familiar face is likely to peering over at them from opposition ranks.

Just last month, Donnacha Ryan made his long-awaited debut for Racing 92 in their Top 14 clash with Stade Francais having recovered fully from a neck hernia injury which had kept him sidelined since his summer move from Munster.

It was 33-year-old Ryan’s first appearance since Munster’s Pro12 final defeat to Scarlets  at the Aviva Stadium last May. Ryan won 167 caps for Munster during his time with the province.

Munster captain Peter O’Mahony said the vastly experienced Ryan was sure to have an extra big influence on the Racing squad this week as they prepare for Sunday’s crucial Round 5 clash.

O’Mahony said: “I think that class of a player is going to have an influence on whatever team you're going to play with.

“You saw at the weekend, he was into everything, he was busy and making a nuisance of himself, his lineout defence was excellent

“We depended on him a lot here for carrying, but they probably have sufficient numbers to do that, so he can put the head down and work hard.

“He'd enjoy that, you'd expect a player of that quality to have an influence on whatever team he's playing for.”

Munster second row Billy Holland visited Donnacha Ryan in Paris in November and said the Tipperary man was looking forward to his former side’s visit to Paris this weekend.

”Donnacha (Ryan) has settled in well, he’s learning his French and enjoying himself. It’s something different.

“He’s looking forward to hosting Munster.  I think they all are.  They’re moving into their new stadium (U Arena) in December and they’re very excited about that.”

Munster out-half Ian Keatley believes Ryan will bring a great deal of insider knowledge on Munster to Racing, but it is crucial that the squad doesn’t get sidetracked by the ‘Donnacha Ryan factor’ on Sunday.

Keatley said: "I think he (Donnacha Ryan) will bring a little bit of insider knowledge into us, but I think what we've talked about is just making sure we focus on our own game.

"It is going to be great to see Donnacha, but if we start really looking at Donnacha or any one of their other players where they've got strength in depth everywhere and have world class talent everywhere, if we start to focus on that too much we are going to be walking down the wrong path, so our focus mainly this week is about concentrating on us and making sure we perform physically, tactically and even our discipline is going to be massive over there."

One area where Ryan is sure to have plenty of knowledge on Munster is in set-piece play.

Munster head coach Johann van Graan said:  “That's the great thing about rugby, Donnacha is on their side and Gerbrandt Grobler is on our side, having been with Racing before. So I think it's a bit of tit for tat.

“Teams are very smart and teams will adapt.

“I've never worked with Donnacha but I think he's a fantastic rugby player, I've coached against him. Obviously, he will do what's best for Racing at this stage.

“Let me put it to you this way: they are possibly one of the best set-piece teams in Europe. You've just got to look at their scrum, look at their lineout.

“I've watched them now for quite a while and I believe that after New Zealand they are possibly the best man-watch contesting side in the world.

“They put your lineout under severe pressure, so we'll have to be at our best to get some quality ball.”