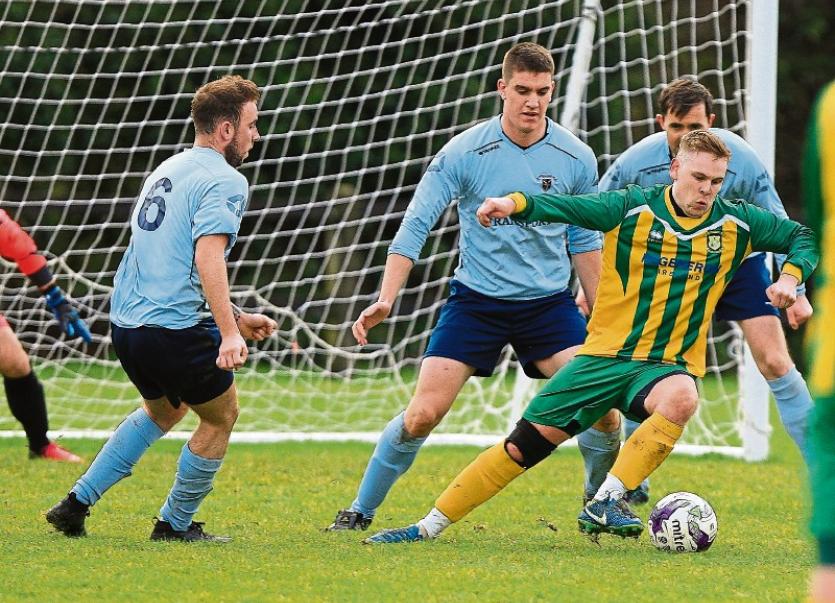 Ballingarry's Dean Clancy tries to find a gap in the Shannon Town defence when the two side met earlier this season. Ballingarry are now top of the Premier Division following a 2-0 win over Glin

There was a curtailed return to action after the Christmas break on Sunday, with just seven of the seventeen scheduled games taking place.

The only Premier game to beat the rain and the frost was the meeting of Glin Rovers and Ballingarry, which resulted in a 2-0 win for the visitors which moves them to the top of the table. Francis Kiely opened the scoring in the 35th minute and new signing, Seoirse Joyce, scored the second in the 55th minute. Ballingarry are now a point ahead of Abbeyfeale, who have a game in hand.

We also have new leaders in Division 1, with Killeaney taking over top spot after their exciting 3-2 victory at home to AK United, who opened the scoring. Sean O’Connor equalised and Paul Brouder put Killeaney ahead from the penalty spot in the 35th minute. AK were on top after that but it was the home team who scored next, a vital insurance goal by O’Connor midway through the second-half. AK pulled a goal back in the 85th minute and would have equalised at the death but for a great save by Seanie Lynch.

Killeaney lead by a point from Abbeyfeale United B, who had to settle for a 1-1 draw at home to Glantine. In a typically tight derby contest, John Riordan opened the scoring for the visitors in 65th minute and Barry Sheehy equalised in the 80th minute.

Knockaderry moved into joint second in Division 2 after an 88th minute header by Kieran Guinea earned a 1-1 draw away to Newcastle Rovers B, who had taken the lead in the 75th minute with a Darren Geary header.

Glin Rovers B notched up their second win of the campaign when goals from Barclay Costello, Cian Culhane and Ed Mulvihill secured a 3-1 victory away to neighbours Bally Rovers.

Broadford United Reserves missed out on the chance to go three points clear at the top of Division 3 when they lost 3-0 away to Ballingarry B, for whom Keith O’Kelly and Marcus Moore bookended an own goal.

Broadford United remain four points clear in Youths Division 1 after winning 4-0 at home to AK United. Jack Pierce converted a free-kick, TJ Kelly found the net with a 25-yard volley and the other scorers were Kieran O’Flynn and Colm Ryan.

Abbeyfeale United moved into second place on their own with a deserved 2-1 victory away to Askeaton. They opened the scoring after just 38 seconds when Olan Quigley passed diagonally to Gearoid Harnett who crossed sweetly for Jason Dillon to head home from a few yards out. Dillon was unlucky not to have had a first-half hat-trick, hitting the post twice, as well as coming very close on two other occasions. He made it 2-0 in spectacular style in the 49th minute, collecting Quigley’s flick-on from DJ Stack’s free-kick and sending an unstoppable curler into the top left-hand corner from 23 yards. Askeaton were on top after that and substitute Kevin Guinea headed against the crossbar from a corner before they pulled a goal back in the 68th minute when Dylan Moloney scored from the penalty spot after a hand-ball. Abbeyfeale held on for victory, with central midfielders, Adam Maymard and Ted Moloney, offering vital protection to the back four, in which centre-halves Dylan Quirke and skipper DJ Stack and left-back Caleb Martens were outstanding.

Askeaton can still be a force in the title race, as can Newcastle West Town FC, who won 7-1 at home to GB Rovers. Liam Kennedy scored four goals and he was joined on the scoresheet by Dylan Singh, Adam Lacey and Luke Gleeson.