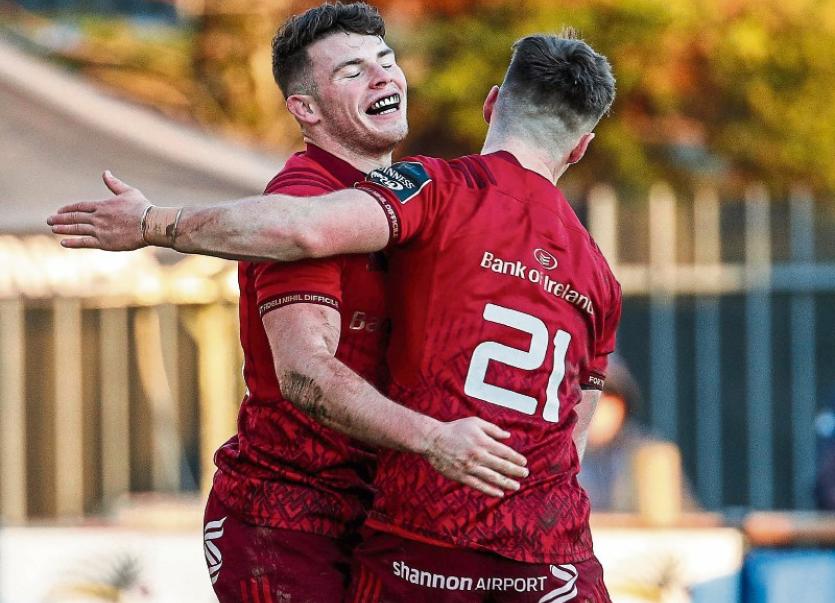 Calvin Nash, left, being congratulated by Jack Stafford after scoring a try away to Zebre, starts for Munster away to Ulster on New Year's Day

MUNSTER head coach Johann van Graan has made wholesale changes from the side which lost to Leinster on St Stephen’s Day for the latest interprovincial fixture away to Ulster in the Guinness Pro14 on New Year’s Day, 5.30pm.

Van Graan has made 11 changes in all with Keith Earls recovering from injury to take his place in the centre along with Sammy Arnold.

Exciting young winger Calvin Nash gets his first start of the season in the Pro14 on the right wing, while the fit-again Ronan O’Mahony is listed among the replacements.

James Cronin, Niall Scannell and John Ryan start together in the front row for the first time this season for the trip to Belfast.

Darren O’Shea joins Billy Holland in the second row with Holland taking over the captaincy duties for his 16th successive start in this campaign.

Tommy O’Donnell is the other forward to retain his place from the Leinster game as he makes the positional switch to blindside for the round 12 encounter with Cloete returning to openside and Jack O’Donoghue starting at number 8.

Sammy Arnold switches to inside centre this week and Earls outside him.

With Alex Wootton again on the left wing, the academy’s Calvin Nash starts on the opposite flank for his first start of the Pro14 season, and Simon Zebo completes the back three at fullback.

Duncan Williams and JJ Hanrahan form the half back pairing.

Named in the replacements is winger Ronan O’Mahony who has successfully rehabbed the fractured fibula sustained against Treviso last April to be included in his first match-day squad of the season.

If sprung from the bench, Jeremy Loughman, who was previously capped with Leinster, will make his Munster PRO14 debut in Belfast.