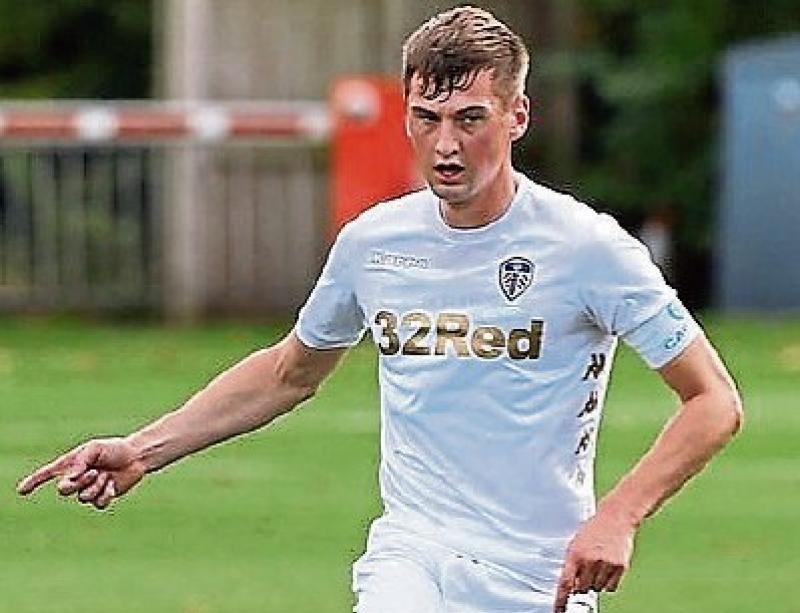 TWELVE months ago talented Ballybrown-born defender Paudie O’Connor made the seismic switch from Limerick FC to Leeds Utd, a giant of English football.

Twenty year-old O’Connor’s rise has been nothing short of meteoric. From Kilcornan, to Breska Rovers, on to Regional Utd, and then signing for Limerick FC at 16 in July 2013 to play with their U-19s.

Twelve months ago, cultured defender Paudie, son of Tom and Maura, signed for English Championship side, Leeds United, a club with a proud and decorated past, currently plying their trade in the Sky Bet Championship.

How big a decision was it to leave Limerick given they had won promotion back to the Premier Division?

Paudie O’Connor: "I was in UL through that season Limerick were in the First Division (2016) studying engineering.

“I had decided to take a year out at the end of that year to concentrate on football. I deferred the place in college.

"There was nothing holding me back. I had a few contacts from England who got in touch and asked me to come over, so I went over, to look at my options, see what was going.

"I had a contract offer from Limerick (for the 2017 Airtricity League Premier Division season) quite quickly after the season ended, but I didn't rush into any decision.

"I went over, went to Crystal Palace for a few days, went to Leicester for quite a bit and then Leeds came in this time last year, just after Christmas.

“I went there for a week, played a couple of games and liked what was there. They liked me. I came home and let Leeds and Limerick speak. It went from there.

"I don't think the decision to go was too easy to be honest. What my thinking was where will I get probably the best development for me going forward?

“I thought the professionalism, the set-up, the facilities, everything, was swinging me more than just football.

“I was going to get that wherever I went, so it was off-the-field benefits, lifestyle stuff, getting that level of exposure with the facilities was going to benefit me more than playing another year in the Premier Division which was appealing to me.

"It definitely wasn't an easy decision, but the one which would benefit me more was to go."

What big a change has life at Leeds Utd been for you?

"I was training mainly with the U-23s. I had missed out on the League of Ireland pre-season because I didn’t go back with Limerick.

“ I had two to two and a half weeks myself with the S&C coach at Leeds. That got my fitness levels on the pitch and in the gym up to scratch.

"I played about six or seven games with the U-23s and trained with the first team until the end of the season.

“It was nice coming back in for pre-season knowing what I was getting myself into because I was aiming to make sure I would come back firing for pre-season.

"That is one of the areas I need to improve on, the physicality, being a centre half, my quick feet, having that there on my door step helped

"I had a small idea before I went about the support base for Leeds Utd in Ireland. I knew about Johnny Giles and the Irish connection and that.

“But not for a minute did I realise the amount of Irish supporters Leeds has. I got messages literally for about two weeks straight of different, supporters clubs in Galway wishing you well. I didn't have any idea of that.”

You were involved with the Leeds first team squad for pre-season training last summer?

PO'C: We were due back in  for pre-season on July 1, but myself and another lad got called back on June 24, a week early because we were going to be with the first team.

"I did three-and-a-half weeks training with the first team because the new gaffer Thomas Christiansen and his backroom team came in. He wanted to have a look at everything.

“I knew after that it was only going to be bit-part for me, realistically.

“Our two starting centre halves, were the Swedish international Pontus Jansson and Liam Cooper, the skipper, and after that, he brought in a lad from Everton Matthew Pennington on loan, I knew the door mightn't be open as much as I would wish for, but that is football. It is going to throw up challenges.

"I played with the U-23s, got on the bench for the first team a couple of times for a few of the League Cup games.

“It was nice to be involved, but going forward, in the next couple of months, I will probably be looking for first team football again because if it doesn't come at Leeds maybe somewhere else because the U-23s is good and all, but there is not that level of competitiveness that I am used to or like.

“I have a Spanish coach with the U-23s Carlos Corberán and it is good to learn a complete new way of football and new way of thinking about it. That is good for me and for my football.”

With former Republic of Ireland international Stephen Hunt as your agent, what is next?

PO'C: “Going forward, I would like to be back playing first team.

"There is always the loan option as well. You can get a season-long loan, so we will see what options are on the table, I won't be jumping into anything without thinking over.

"As you say, I have Stephen Hunt, the former Irish international, looking after me. He is my agent. He has been good to me. He lives in Birmingham, not too far away from me.

“He is up every second week really if I have a game or just to have a chat.

"Stephen, myself and my Dad will sit down and assess the options. I can't complain. My time so far has been enjoyable and I have learned a lot.”

You became a social media hit in November when acting as peacemaker in a friendly game in Wales which was ultimately abandoned?

PO'C: “Someone in the club was doing someone a favour in Rhyl FC in North Wales about two and a half hours from Leeds, so we arranged to play them in a friendly on a Tuesday night.

“The pitch wasn't great. Within about two minutes there wasn’t a blade of grass to be seen. The home side took a physical approach to the game.

"Myself and a couple of English boys in the team were the only ones used to it. They flew in on the Spanish boys in our side who didn't like it. It was getting heated.

“We were sticking up for ourselves, but you could tell it was a game which was going to get out of hand fairly quickly.

“At the start of the second half, our right back, played a pass inside and a guy left another one late on him.

“He thought, ‘I'm not having this’ and squared up to the Rhyl player who lands a haymaker out of nowhere.

“It was something like you would see outside a night club in town.

"I am the closest man and have seen it, so I went in to give him one back. The hand bags start flying then. It was one of these things that happened. The game was abandoned.

"A supporter filmed it and by the time we got on the bud to go home it was all over all types of social media.”

How do you rate your experience at Leeds to date?

POC: "I feel it was the right decision (to move to Leeds) and I a reaping the rewards with the fact of the level of football I am getting there, obviously training with the first team and that under Christiansen. He is a really good manager and knows his stuff.

"I suppose there is only so much learning you can do here (in Ireland), that is not being disrespectful to any of the managers in this country, but the level of coaching in England is that big higher.

“ I feel like I am learning all the time. That is the main reason I moved and I am happy enough with it.

"We play in an U23 development league, so our next game is against Burnley on Friday, January 5.

“We played Bolton in our last game which ended in a 2-2 draw.”