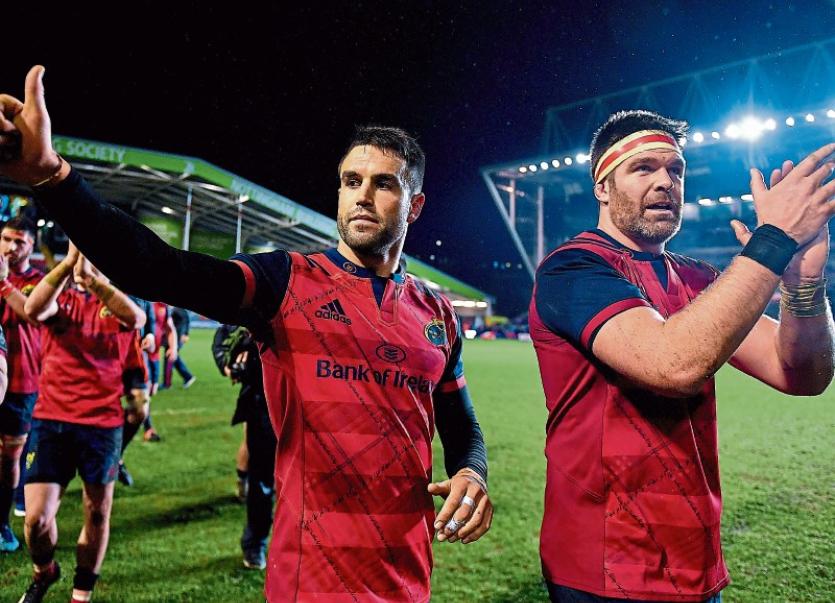 MUNSTER are sitting pretty at the top of Pool 4 of the Champions Cup after completing a famous double over the Leicester Tigers in the back-to-back fixtures.

A tenacious Munster side secured a deserved 25-16 victory over the Aviva Premeirship giants at Welford Road on Sunday night to take a four-point lead over Racing 92 at the top of the pool with two further series of fixtures to come in January.

Munster are due to travel to the U Arena in Paris on the weekend of January 12 to 14 to face Racing in their next pool fixture before taking on Castres Olympique in their round six game at Thomond Park a week later.

Munster captain Peter O'Mahony deservedly won the Man of the Match accolade as the two-time European Cup winners became the first side to complete two wins over the Tigers at the back-to-back stage of the Champions Cup. It was also Munster's first win at Welford Road in 11 seasons.

Afterwards a delighted O'Mahony said: "It's a massive result for us. We know the history we have with Leicester. It's bloody hard to get a result here, it's been 11 years.

“We knew going out here it wasn't going to bethat open and we had to knuckle down.

“The boys battled hard and it was a great performance for them. I am delighted to get out of here with a win. It is a difficult place to come.”

Meanwhile, Munster's new defence coach JP Ferreira will join the province this week having signed a contract until June 2020.

Thirty four-year-old Ferreira makes the move from Super Rugby side Lions Rugby where he held the position of defence coach since 2013, helping the side to a Currie Cup Championship in 2015 and consecutive Super Rugby finals in the last two years.

After a decade working with the South African club across a number of coaching and analyst roles, Ferreira joins Munster head coach van Graan, forwards coach Jerry Flannery and backline and attack coach Felix Jones at the province.

@MunsterRugby’s fans in fine voice as they celebrate with the players following that memorable victory. #ChampionsCup pic.twitter.com/hMobBgHKvL

Welcoming Ferreira's appointment, van Graan said: “We are delighted that JP is joining our coaching team. He is a great coach that has been very successful at Super Rugby level, getting his side to finals with an excellent defence record.”