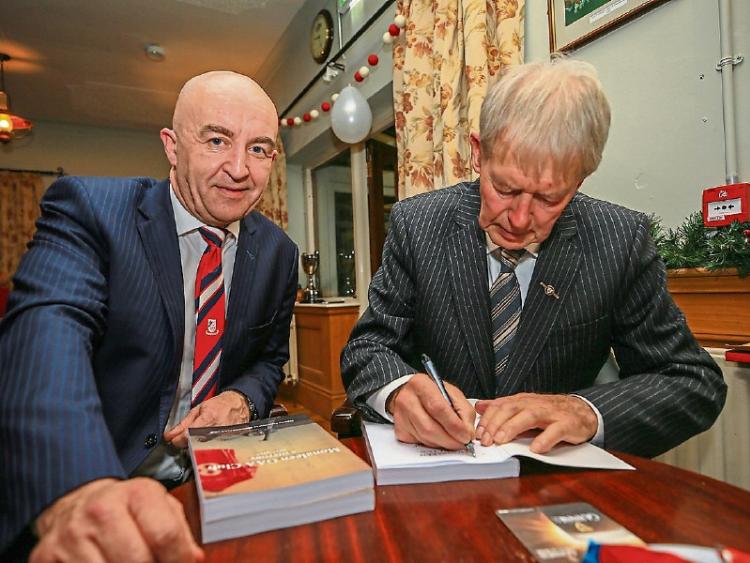 It’s only when words and pictures are put together that the impact of the GAA in community life can be fully appreciated.

The fire that was lit by those amazing men that sat around a table in Thurles in 1884 took awhile to blaze but when it did it played a key part in binding rural Ireland. Clubs were formed and a foundation for future development was created. It takes great leadership to build a club particularly in difficult times. Monaleen is one of Limerick's youngest clubs. Founded in 1957 it still had the same challenges as others that went before them. Just sixty years old the club has built on the vision of its founding fathers and they now have created a beautiful club history which records the years before the club was founded and the years since. It’s clear to see that great time and effort was afforded to this production. From its cover to the last page the good and bad days are remembered. So many players, mentors and loyal club people are remembered in a book that runs to almost three hundred pages. It might surprise some people that Fr. Eammon Casey then a priest in the parish played a key role in the development of Monaleen. Four years before the club was founded he set up a juvenile club in 1953 and that was the seed that created the fruits and opportunities of the future.

When one thinks of Monaleen you are sure to remember men like Christy Murphy and the recently deceased Leo Morrison. These men left a legacy that has inspired so many, the same can be said for Paddy Dillon, a founding member and the first Treasurer of the club. His contribution has been hugely important to the club and his long links don’t look like finishing anytime soon as he was selected a Trustee of the club in 2016. In the book many of the great club people are remembered and the late Noel Moynihan is recalled in a fine article by Liam de Burca. Titled “A True Monaleen Gent”. It’s men like Morrison, Murphy, and Moynihan and many others that guided Monaleen through good and bad days. Just two weeks before Leo Morrison passed away he rang his son Leo, the message was simple, “Make sure to be at the launch of the club history.” He wouldn't have needed encouragement but this was dad reminding his son of its importance.

A huge crowd turned up for the launch of the club history and it was fitting that the great Michael O’ Muircheartaigh was on hand to sign copies of the book and also hold all in attendance in the palm of his hand as he told some great stories. The Chairperson of Monaleen is Caroline O’Kane. She also acted as editor of the club history. Compiling a club history is never easy because people will always ask why such a person or such a thing was left out. O’Kane and her committee have managed to produce a fine book. In the book she says, “The book was a year in creation and has grown from 90 pages to nearly 300. We wanted to mark our 60th birthday in a way that would show how far we have come and which would also honour those that have contributed to the club over the past 60 years. It is our hope that everyone will find something special in the book. This book is a tribute to the past and I hope it will provide a foundation to many chapters of the future.”

In my travels around the country I would often be asked about various clubs in Limerick and when I would bring up Monaleen the automatic reply from people is Brian Geary. This man left his mark on the field and won respect of many for his honesty. Keenan Mullane has a very fine interview with Geary in the book. It covers many topics and goes through his career with club and county. Brian Geary first came to light at underage and he had the cut of a lad that would make it. He was gifted in many sports and one of the questions Mullane asked him, “Was there any risk you may have been lost to GAA.” Geary replied, “Myself and Paul O’Connell sat beside each other in first year in Ard Scoil Ris. A teacher came and asked did we want to sign up for rugby. Paul said he would give it a go. I didn’t, I preferred to stick with hurling.” You can be sure if Geary did play rugby he would have played alongside Paul O’Connell for many years at the highest level.”

Brian Geary continued, “Around ’99 I got an Aussie Rules Trial. I remember I was marking Tadgh Keneally and the two of us had a right battle. I must have impressed as we were both selected from the trials. Kennelly went and signed for Sydney Swans and the rest is history. I didn’t take up the offer. Monaleen were playing a City Final at the same time and I didn't want to miss it.” That last line tells you all you need to know about Brian Geary. The love of his club meant everything to him. He served his club and Limerick with great pride, a player that was brave and honest. When he dropped the shoulder many a man went to ground.

In another fine interview Philip O’Dell talks to Muiris Gavin. From player to management Muiris Gavin has given a lot to his club. He proved to be a real leader with Limerick and very few will know how much work he did to become one of the finest free takers in the country. Gavin is a quiet fellow, a man that won huge respect as a player and as a manager of Monaleen senior football team. Not many players find time to give something back but in the case of Muiris Gavin that can’t be said. He has put a huge amount of time into his club and is also Chairman of the Limerick Football Development Coaching Academy. On this he says, “If you want to compete and win at the highest level you have to put in the time, there are no shortcuts.” Those words nail it in football or any other sport. Nowadays some young lads think it's possible to be great without doing the work. It just doesn't happen.

Monaleen and the people that make up the club have given much in a short space of time to Limerick GAA. They have enhanced the lives of many young boys and girls over many generations. That will only strengthen in the future. In hard times great people laid the foundation, left a legacy and those that have followed and will follow have a duty to be mindful of where it all started.

A great hurling woman was laid to rest last week. Mai Richardson supported Murroe Boher and Limerick and was never shy about showing her affection for both.

As a small lad I would be at the cross in Caherline and time after time John and Mai Richardson would stop and ask the question, “Are you going to the match.” They didn't have to ask twice.

Once in the car Mai would say, “We are saying the rosary join in if you want or else stay quiet.” They both had a great love of hurling and traditional music. They are both gone now but while here they enriched the lives of many. To her family and many friends I offer my sincere sympathy.