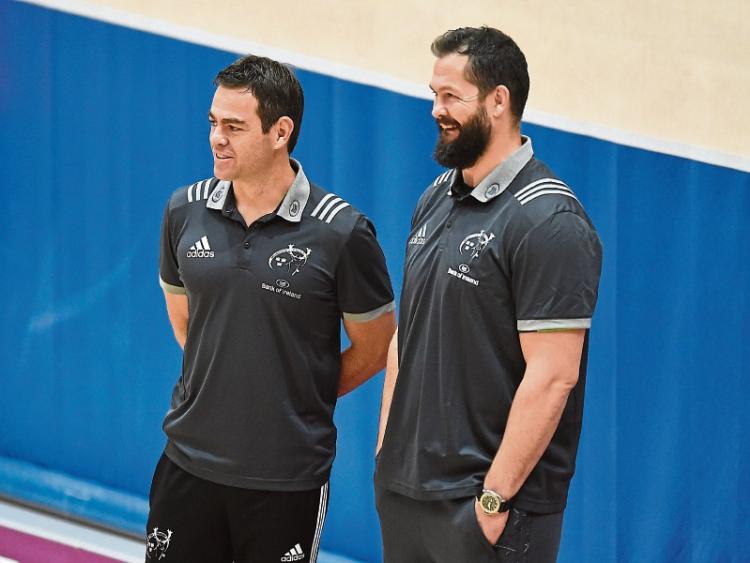 NEW Munster head coach Johann van Graan has indicated that he intends to use ‘consultants’ to assist in his coaching team at the province with the likes of Paul O’Connell and Doug Howlett among the names in the mix.

Van Graan said there are ‘some pretty amazing people in Limerick’ whose knowledge of the game of rugby he would like to tap into.

Van Graan is also looking to appoint a new Munster defence coach following the return of Jacques Nienaber to his native South Africa in recent weeks.

Ireland assistant coach Andy Farrell has been at Munster’s High Performance Centre at UL in recent days as he linked up with the squad in providing training support to the backroom team.

The appointment of a permanent defence coach is one of 37-year-old Van Graan’s ‘big focus points’ as the season cranks up a gear with crucial PRO14 and Champions Cup games looming.

Van Graan said: “There’s one or two names as possibilities (for Munster defence coach), but I want to make sure that I get the right person here that will fit in with the way Munster do things.

“We’re thankful for Joe (Schmidt), we’ve been in contact all along, Andy (Farrell) is here for today and tomorrow. The good thing is there was 14 players in the Irish squad. He and Jacques (Nienaber) also worked together pretty closely.

”He is here for a helping hand. Felix (Jones) has done brilliantly over the past two weeks but we are exploring some names and hopefully sooner than later we’ll have – not an announcement – but someone coming in.

”The decision on a new defence coach is my decision, in accordance with the powers that be at Munster and the IRFU, but obviously I'd like to have a big say in that.

“In terms of consultants, I wouldn't like to elaborate on that now but there will definitely be people coming in and out for short bursts.

”There are some pretty amazing people here in Limerick that I'd also like to get involved at some stage. Still got to have a few coffees on that, but I believe nobody knows everything, nobody's got the secret formula and I'd like to have as much expertise coming into the team as possible to make this a winning team.”

Asked if Paul O’Connell, who has been working with the Munster Academy in an advisory role, would be among those who could be involved in the think-tank, Van Graan said: “Most definitely. I briefly spoke to him at the Racing 92 game and we'll meet up at some stage in the next few weeks.

“He was one of the world's best players, played 100 Test matches for Ireland, if I'm not mistaken and was captain of Munster, so most definitely.

“A guy like Doug Howlett, I spoke to him at the Springbok Test and there's previous coaches involved in Munster that I'd like to spend some time with.

“I've spoken a lot to a guy like Gert Smal, that has coached here before, or ex-players. A guy like Wian du Preez gave me a fascinating view of his perception of Munster.

“I spoke to few players outside of Munster at other provinces, what would be their perception of Munster and it's all pretty amazing.”

“Most definitely (in the case of Declan Kidney). I've got no ego. I'd like to explore every possible avenue, learn as much as I can as quickly as I can.

“I believe you've got two ears and one mouth in life and for the first two months I'd like to listen as much as I can and kind of take it from there and decide who might be involved as consultants or not.”

Van Graan said he had a ‘pretty good idea’ already in terms of where the Munster playing squad would need strengthening for next season.

“Obviously every coach will have a wish-list, but I think the most important thing is to make an opinion for myself.

”I've had Rassie's (Erasmus) view. I've had Felix (Jones) and Jerry Flannery’s view. Even after the weekend, I was so impressed with a guy like Sam Arnold that I didn't know before.

”Yes there are certain positions we'd like to look at. With Simon leaving, fullback is a position we might fill from the inside or the outside.

“So I've a pretty good idea. I think the strength of Irish Rugby at this stage is the working relationship between the IRFU and the provinces and that's something I've bought into and we'll do our planning accordingly.

“Like I said before I'd love to have had a pre-season to get to know guys but I'm slap-bang in the middle of going into Europe, the Christmas break.

I see it as an opportunity, a lot of bases to cover at this stage, but in terms of recruitment I'm pretty well aware of who might leave, who we want to keep and those are one on one conversations that I'll have with players over the next couple of weeks.”