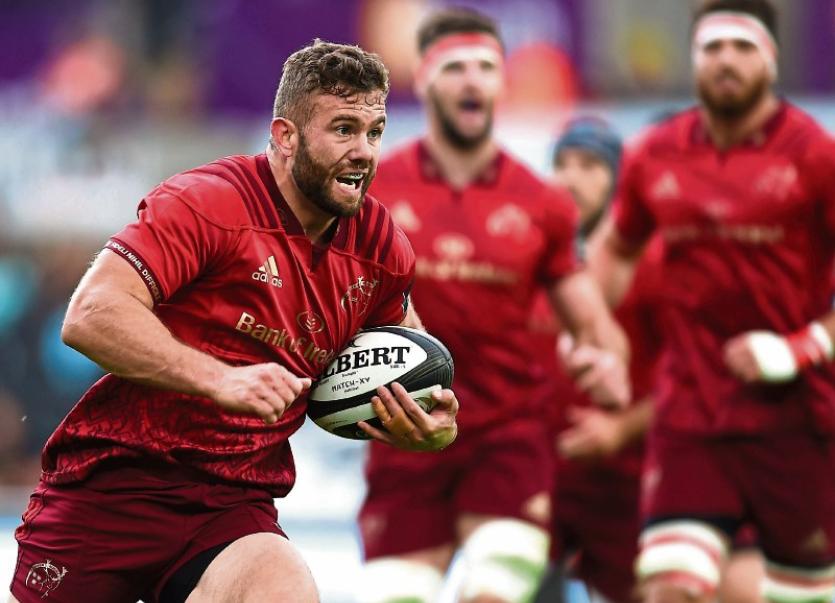 Ireland centre Farrell is facing six to eight weeks out after sustaining a medial ligament sprain in his knee in Saturday’s autumn international with Argentina.

News on Jaco Taute is even more bleak as Van Graan revealed, at his first media briefing at UL this Tuesday, that the South African will possibly be sidelined until the end of the season due to another knee injury.

With another young centre Dan Goggin ruled out with a knee injury and Keith Earls set to be sidelined until the New Year with a hamstring injury, Munster’s midfield options are limited.

Rory Scannell and Sam Arnold  are likely to fill the midfield berths in Saturday’s Pro14 clash with the Ospreys at Musgrave Park, 5.30pm, as well as those upcoming European ties with Leicester Tigers.

Utility back Simon Zebo, who was replaced late on in Munster’s PRO14 win over Zebre in Parma on Sunday after he jarred his knee, underwent  a scan yesterday to determine the full extent of the injury.

Meanwhile, Van Grann said he would do everything in his power to keep Peter O’Mahony at Munster beyond the end of his current contract which expires this summer.

O’Mahony has been linked with a possible move to England or France after reports that he rejected a contract offer from the IRFU.

Van Graan said: “We'll have a conversation in due course. He's (Peter O’Mahony) contracted nationally, and between Joe (Schmidt) and (IRFU Performance Director) David (Nucifora) I'm sure they're handling that.

”I haven't spoken to him about his future one on one. But as I've stated before, I'd love him to stay with Munster.

“He's hugely influential with Ireland and Munster rugby, we know the values he stands for and the way he plays. People follow him. If, in any way, I can help him stay with Munster I'll do that.”

Ireland defence coach Andy Farrell is with the Munster squad at their High Performance Centre for a few days this week to provide  training support to the backroom team.

Van Graan said the appointment of a defence coach following Jacques Nienaber’s departure is one of Munster’s ‘big focus points.’

He also revealed that he intends to use ‘consultants’ for ‘short bursts’ of time, name checking Paul O’Connell, Doug Howlett and Gert Smal.