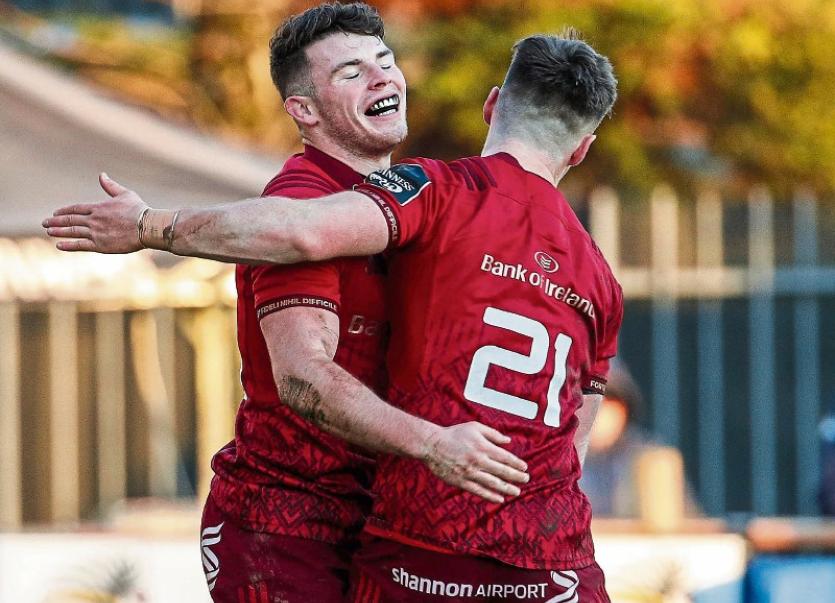 Calvin Nash, left, is congratulated by team mate Jack Stafford after scoring his first Munster senior try in their Pro14 win over Zebre in Italy on Sunday

LIMERICK’S Calvin Nash celebrated scoring his first senior try for Munster as the province scored a vital 36-19 bonus point win over Zebre in the Guinness PRO14 in Parma on Sunday.

Nash, who plays his club rugby with Young Munster, was sprung from the bench in the second half, and dotted down in the final play of the game to bring Munster’s try tally to five.

Munster will be concerned over an injury picked up by full-back Simon Zebo in the second half which forced him to be replaced. The province’s crucial back-to-back Champions Cup fixtures with Leicester Tigers are now less than two weeks’ away.

Rory Scannell and James Hart  both crossed in the first half for Munster who appeared to be in for a comfortable afternoon when leading 17-0. It was scrum-half Hart’s first try for the province on his first start.

But after both Robin Copeland and Sam Arnold were sent to the sin bin, Zebre – who beat Ulster in round five – came roaring back as Giulio Bisegni and skipper Jacopo Sarto both crossed for tries for the Italian side.

However, after the break Munster regained dominance and when restored to their full complement of 15 players, put the game to bed when winger Alex Wootton sped clear for two tries. The brace brought his try tally for the season to seven.

That secured the bonus point for van Graan – who only arrived in Limerick this week to take over from Rassie Erasmus meaning coaches Felix Jones and Jerry Flannery and performance analyst George Murray took charge of most of the preparations for the Zebre fixture.

Simon Zebo laid on the second for Wootton with a fantastic break and pass that hit his winger in stride but the Ireland star then went off with what looked like a shoulder injury.

Munster Rugby Academy scrum-half Jack Stafford, who plays his club rugby with Shannon, came off the bench to make his Munster senior debut late on.

South African flanker Chris Cloete was awarded Man of the Match in Parma on only his second start for Munster.