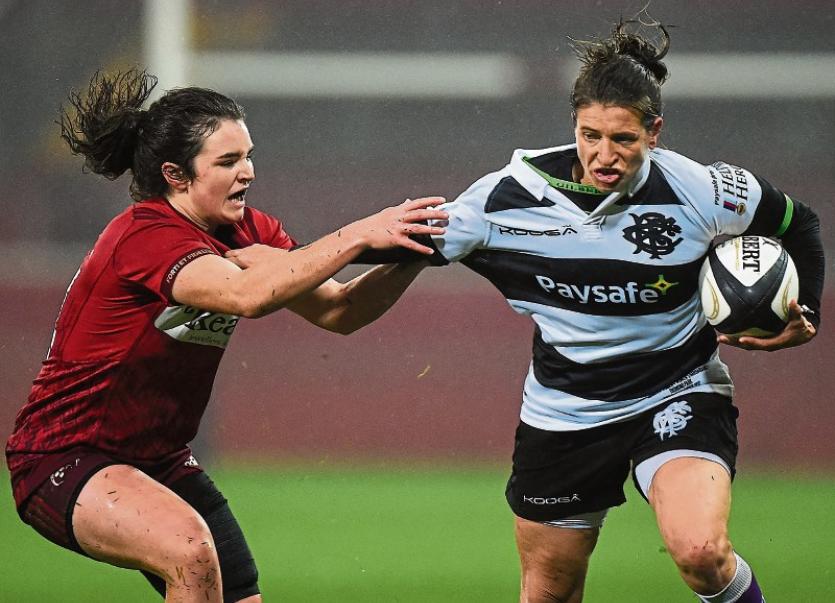 Christelle LeDuff, of Barbarians RFC, is tackled by Munster's Deirbhile Nic a Bhaird during the women's representative match at Thomond Park on Friday evening

THE Munster Women’s team were beaten 19-0 by the Barbarians side in their historic clash at a rain-soaked Thomond Park on Friday night.

The Barbarians Women’s team, featuring players from seven nations, were playing their first-ever fixture and named a 23-strong squad for the occasion.

The star-studded visitors proved too good for a plucky Munster side as a first-half penalty try was followed by further tries in the second half as Ireland international Ailis Egan scored off a counter-attack before Tania Rosser finished off a length of the field move for a third Barbarians try.

Munster head coach Laura Guest played a different XV in each half with the interprovincial series now just three weeks away.

Forward power laid the platform for the Baa-baas as their scrum earned a penalty try just before the half-hour and Barbarian flair clinched the win in the second half as the invitational side added two further tries after the break.