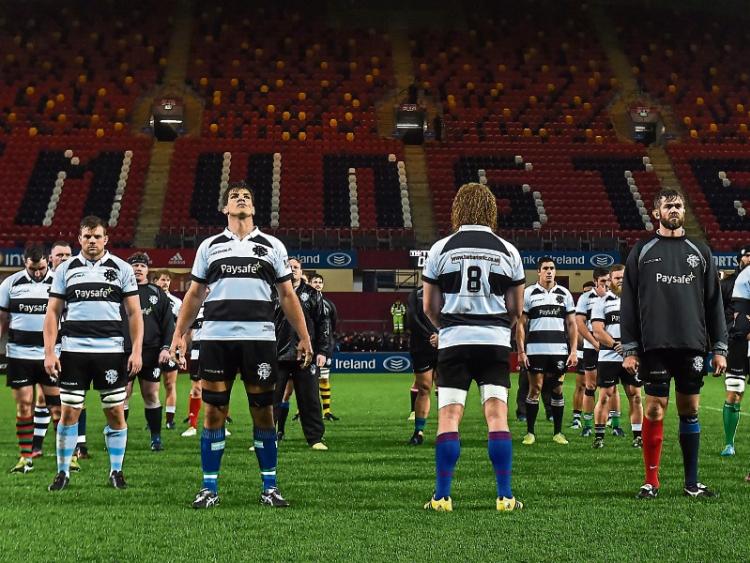 arbarians players, led by Willie Britz and Donncha O'Callaghan stand in the memory of Anthony Foley, before their game with Tonga at Thomond Park on Friday night

THE Barbarians honoured Anthony Foley’s memory before edging past Tonga 27-24 in a highly entertaining international fixture played in filthy wet and windy conditions at Thomond Park on Friday night.

Two tries in the final 12 minutes from Leinster and Ireland flanker Jordi Murphy and replacement scrum-half Andy Ellis sealed victory for the Barbarians before an appreciative if soaked attendance.

The Barbarian players formed a figure of 8 to honour the memory of former Munster head coach Anthony Foley before kick-off with former Munster and Ireland second-row Donncha O’Callaghan leading the tribute at the front. O’Callaghan was a used replacement for the game having returned home from a UNICEF trio to Sierra Leone earlier in the week.

The Baa-Baas moving gesture to the former Munster number eight Foley was warmly applauded by the supporters who braved a filthy wet  night.

Munster will hope that an injury sustained by their prop James Cronin, who lined out for the Barbarians, but was replaced in the first half will not prove serious.

Tonga overcame the miserable wet and windy conditions right from the kick-off with their Leicester full-back Ateli Pakalani touching down inside three minutes. Tonga led 14-0 after nine minutes when flanker Fotu Lokotui touched down, with scrum-half Sonatane Takalua converting both.

Back came the Barbarians, however, and tries from giant Waratahs winger Tagele Naiyaravoro and full-back George Bridge, who also crossed twice in the narrow defeat to the All-Blacks at Twickenham just six days earlier, closed the gap to 14-12 with out-half Robert Du Preez adding a conversion.

A Du Preez penalty just before half-time completed the Baa-Baas storming comeback as the invitational side led 15-14 at half-time.

The Baa-Baas introduced former Thomond Park favourite O’Callaghan as a second half replacement as the conditions continued to deteriorate.

Tonga hit the front on 62 minutes when replacement Sione Vailanu broke from the back of a ruck before powering over for a 19-15 lead.

However, the see-saw nature of the contest continued in the 68th minute when the Baa-Baas scored a third try through Leinster flanker Jordi Murphy off the back of a well-executed maul.

Du Preez converted to see the Baa-Baas into a 22-19 lead entering the final 10 minutes.

A try from Andy Ellis soon after saw the Barbarians move 27-19 ahead, before Tonga struck back with a second try late on from Vailanu.