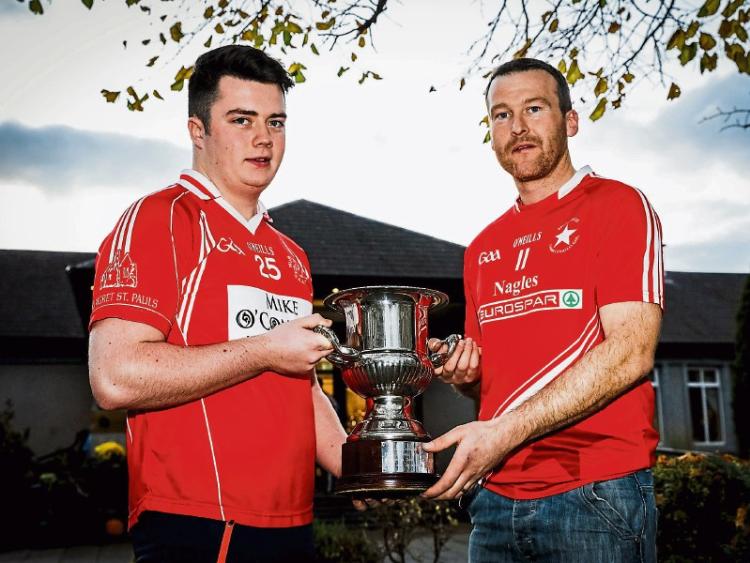 Finalists: Mungret's Donal Browne and Paddy O'Leary of Bruff ahead of Sunday's Junior B Hurling final

A repeat of the 2012 final between Bruff and Mungret is what awaits in Sunday’s noon decider in the Limerick Junior B Hurling Championship in Ballyagran.

Five years ago Bruff were winners 1-11 to 0-11 and there are players remaining from both sides for the 2017 renewal.

Indeed both have played Junior A league and championship in recent seasons.

Captained by Paddy O’Leary, the team will have the experienced John A Moran in goals. Moran and centre back Mike Weekes remain from the ‘12 final win.

Others key to the men from the banks of the Morning Star rivers are Niall Brosnan, Tony Burke and former Limerick footballers John Cooke.

Bruff have played nine games to reach this final. The championship started out combined with the A Championship in the south division and they then beat Camogue Rovers in the B Final. Victory followed over Ballybrown in the quarter final and they Fedamore were beaten after a replay in the county semi final.

Captained by Stephen Dilworth, they have experience in the shape of All Ireland U-21 winner Colm Moriarty and Denis Giltenane and youth with minors Liam Harrington and Conor Lynch. Other key men are goalkeeper Declan Browne and John Kenny.

Mungret were beaten at the quarter final stage for the last two years. They have played six games to reach this final – beating Ballybrown in the city final, Camogue Rovers in the county quarter final and then Feohanagh in the semi final.

The newly crowned Limerick champions will progress to the Killeedy GAA run Munster Junior B Tournament. A semi final spot awaits on Sunday December 10 against with Cork’s Killavullen or Kerry’s Ladys Walk.