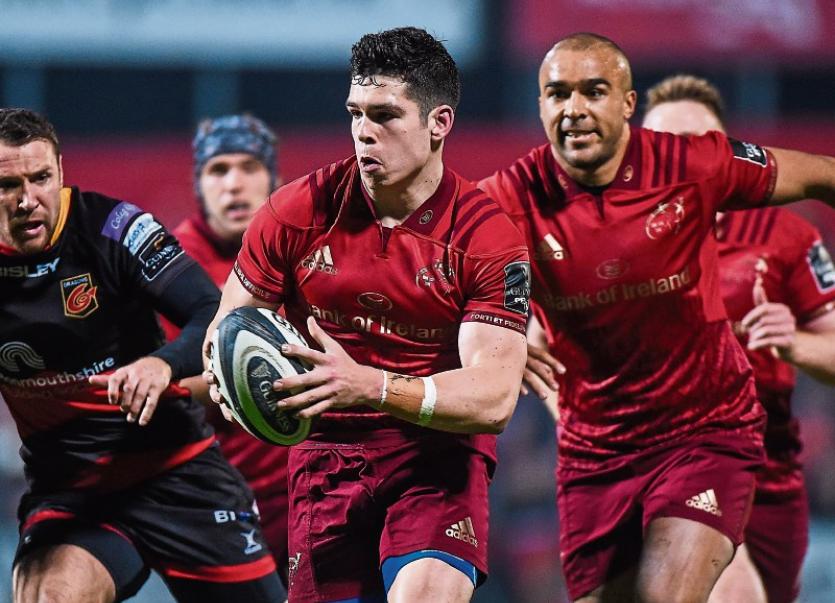 Alex Wootton in action for Munster on Friday night in Cork

MUNSTER Rugby's 49-6 win over the Dragons in Cork on Friday night is not a game that will live long in the memory for most.

However, there were signs of some progress in the Munster attack that has not been on show before.

Over the last season and a half, during Rassie's time at the helm, Munster have struggled to score freely in the ‘bigger’ games.

Last season's Champions Cup semi final loss to Saracens and the subsequent loss to the Scarlets in the Pro12 final, coupled with the sluggish battle against Racing Metro, showed that Rassie, Jacques Nienaber, et al, have brought the team really far in terms of structure, intensity, consistency and bottle, but there is still more to come from the side for them to be the ‘finished’ article.

Johann van Graan, with the able help of Felix Jones and Jerry Flannery have now to build on the defensive blocks laid by the South African duo.

The game at the weekend was definitely a start, all be it, against poor opposition.

Munster's back three in particular has been an area where their collective work in the aerial battles is without question.

Some of the best back three players in the air, in World Rugby, reside in this province. The next step for this team is to perfect their attacks off of first phase and counter attack.

With players such as Conway, Sweetnam, Earls, Farrell and O'Mahony already well established, the province has unearthed a real star in Alex Wootton. The winger was the star of the show on Friday night despite not even featuring on the scoresheet.

The Garryowen flyer racked up 107 metres off of just five carries. Yes, you can question defence, but you must also admire the players innate intent to carry ball as well as his ability to run at top speed with the ball in both hands.

With this level of talent only breaking into the side, the finesse in now there to match the powerful grunt.