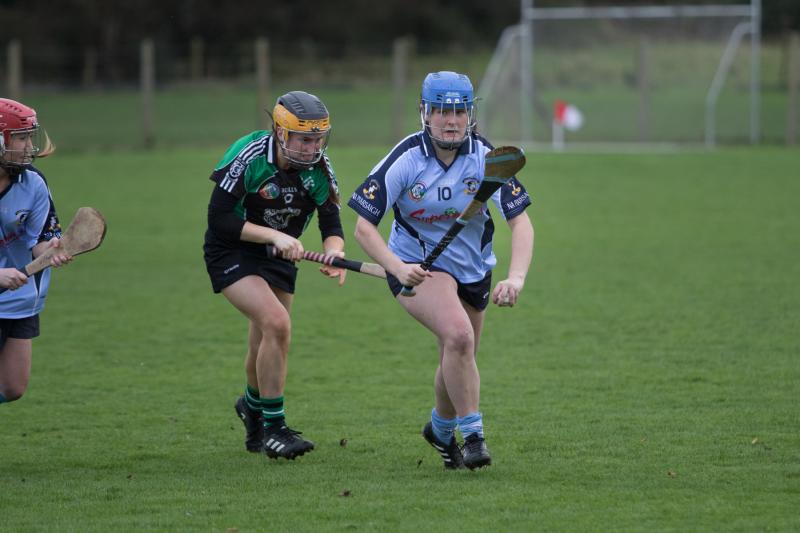 Action from today's clash between Na Piarsaigh and Clanmaurice of Kerry

It finished Clanmaurice 2-11 Na Piarsaigh 1-4 in the provincial final in Mungret.

The game was level at half time and Na Piarsaigh edged clear at the start of the second half but then Clanmaurice showed all their class and experience to lift the title.

Na Piarsaigh had a dream start when Jackie Maguire had a goal in the fifth minute after Aoife Wilson and Patrice Diggin had exchanged frees.

The Kerry side had the game level by the 12th minute, 1-1 to 0-4 but back came the Caherdavin side again with scores from Sinead Madden and Sinead McNamara (free) for a two point lead just after the mid-point of the half.

Over 45-minutes of play remained and the Limerick intermediate champions were to score just once more – Clanmaurice hit 2-7 in this period.

At half time it was 1-3 to 0-6 with Na Piarsaigh thankful to Laura O’Neill for a superb point blank save in the final minutes from Ann Marie Leen.

At the other end, a long delivery from Tara Hurley almost crept into the net but the sides remaining dead-locked at the break.

Just two minutes into the second half Na Piarsaigh were ahead after a Wilson free but that was as good as it got.

Clanmaurice then took over, albeit kick-started by a fortuitous goal from a Patrice Diggin free in the seventh minute of the half.

Na Piarsaigh were pressing for a score when Clanmaurice hit on the counter attack and Jackie Horgan’s 50th minute goal all but sealed the title win.