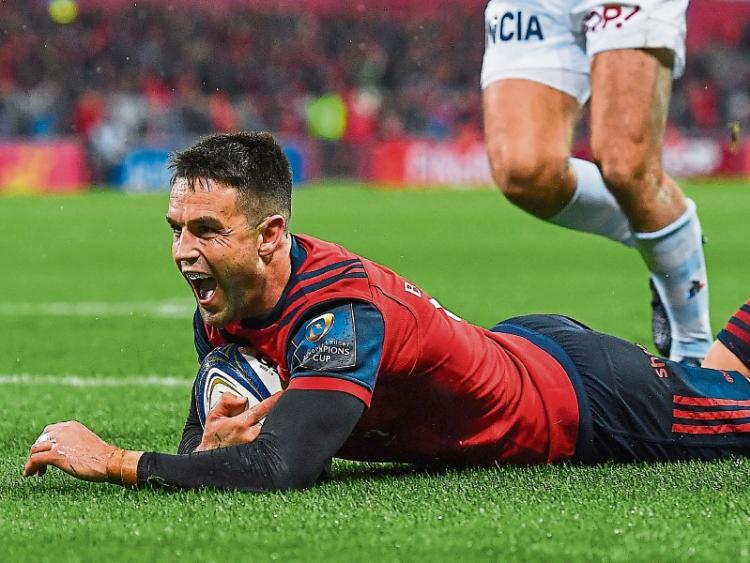 MUNSTER ground out a vital 14-7 victory over French Top 14 side Racing 92 at a wet and windy Thomond Park on Saturday night to keep their hopes of Champions Cup qualification very much alive.

Two tries in the final quarter from Conor Murray and Andrew Conway, both converted by Ian Keatley, ensured Munster secured their first win in Pool 4 before an attendance of just over 22,000.

Racing ensured a nervy finish to the contest, however, after  Leone Nakarawa struck for a late try which was converted by replacement scrum-half Teddy Iribaren.

Munster prop Dave Kilcoyne picked up the Man of the Match accolade, after an impressive display in the scrum and loose where he carried superbly.

A moving minute’s applause was observed before kick-off as a mark of respect to Munster’s late head coach Anthony Foley who passed away 12 months ago.

After a scoreless opening hour which produced an an old school arm wrestle of a contest where defences held sway, Murray finally broke the deadlock when blocking down a clearance kick from Racing captain Maxime Machenaud before following up to score.

Conway’s try on 69 minutes gave Munster some breathing space. However, the French side did manage to pick up a losing bonus point with that late try.

Next up for Munster in the Champions Cup are back-to-back fixtures against Leicester Tigers in December.