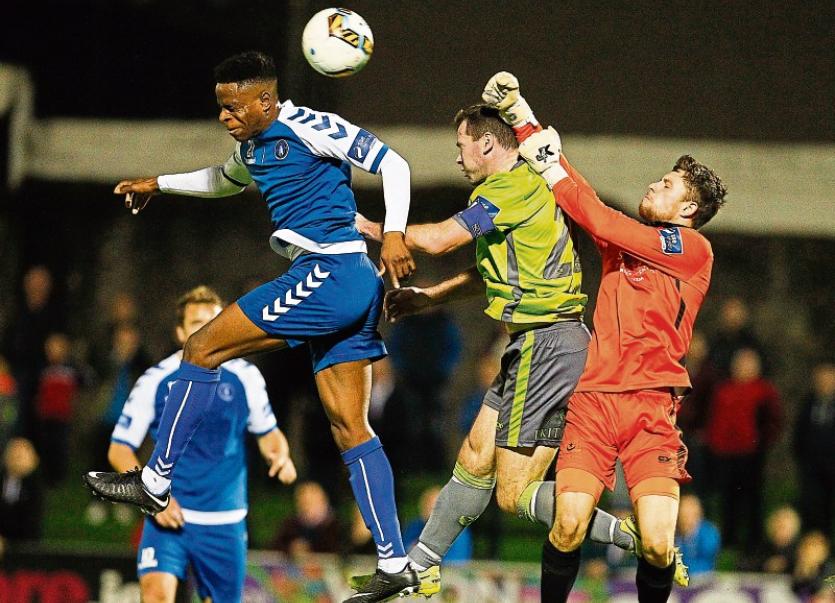 LIMERICK FC took a giant step towards securing their SSE Airtricity League Premier Division status for next season after recording a priceless 1-0 victory over already-relegated Drogheda United at the Markets Field on Saturday night.

Rodrigo Tosi netted from the penalty spot in the 48th minute, his 13th league goal of the season, to help the Blues move five points clear of the relegation zone with now just two series of games to go.

Limerick supporters in an official attendance of 1622 breathed an audible side of relief at full-time as the home side moved five points clear of 10th placed Galway Utd.

Resilient Limerick have now taken eight points from their last four league fixtures to move within touching distance of safety.

Limerick FC manager Neil McDonald made two changes to his starting line-up for the game. Joe Crowe came into the side for suspended captain Shane Duggan, while Barry Cotter got the nod to start ahead of Dean Clarke.

Limerick lacked inspiration in the opening half as the already relegated Drogs proved stubborn opponents.

However, Limerick FC took the lead three minutes into the second half. From Lee J Lynch’s excellent cross from the right, Drogs defender Colm Deasy fouled Rodrigo Tosi as he rose to head the ball goalward.

The Brazilian striker got up and dusted himself down, before keeping his composure superby to slot the ball into the back of the net.

The Limerick fans greeted the goal with a mixture of delight and relief.

The home side’s task was made considerably easier with 20 minutes remaining when full-back Deasy, who was booked in conceding the penalty, was sent off after picking up a second yellow card.

Limerick boss Neil McDonald handed a Premier Division debut to William Fitzgerald in the 77th minute after he was introduced for Stephen Kenny.

A composed Fitzgerald played a big part in creating a great chance for Limerick to net a second goal in the 79th minute after a powerful surge by Hery. However, goalscorer Tosi was off target with a diving header from Fitzgerald’s pinpoint cross.

Limerick easily saw the game out as the Shannonsiders claimed their third successive league win of the season over the Drogs.