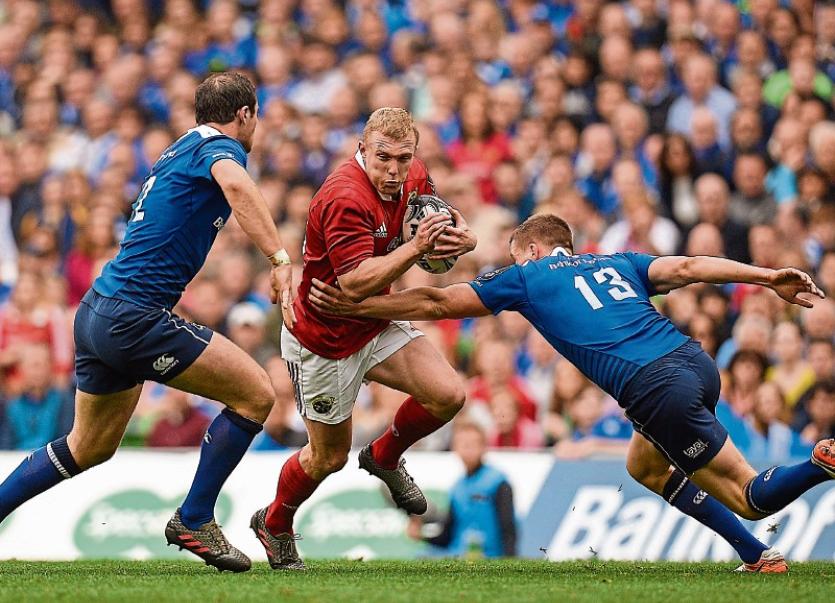 Keith Earls, pictured in action against Leinster last season, makes his first start of the season for Munster at the Aviva Stadium on Saturday

MUNSTER Director of Rugby Rassie Erasmus has rung the changes to the team's backline for Saturday’s big Guinness PRO14 interprovincial derby with Leinster at the Aviva Stadium, 2pm.

Munster’s backline includes four personnel changes and one positional switch from the side which thumped Cardiff last weekend.

There is new a centre partnership with Tyler Bleyendaal named at inside centre alongside Chris Farrell.

Returning international Keith Earls makes his first appearance of the season starting on the wing and as JJ Hanrahan is promoted to make his first start of the season at fullback,

Andrew Conway swaps the full-back jersey for the right wing.

It’s also as you were in the halfbacks with Conor Murray and last weekend’s man-of-the-match Ian Keatley again named to start.

In keeping faith with the forwards that saw off Cardiff in Thomond Park, Erasmus makes no changes to the starting pack with captain Peter O’Mahony again leading the side and number 8 CJ Stander running out for his 100th appearance in a Munster jersey.