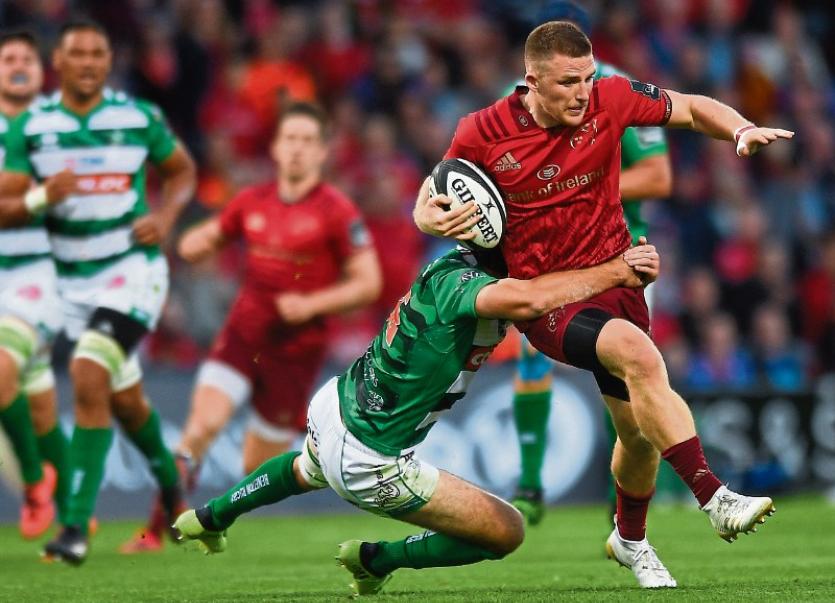 Andrew Conway will make his 100th appearance for Munster when the Cheetahs visit Thomond Park this Saturday, 5.15pm

FULL-BACK Andrew Conway will make his 100th appearance for Munster in the Guinness PRO14 when Rassie Erasmus side lock horns with newcomers the Toyota Cheetahs at Thomond Park this Saturday, 5.15pm.

Conway turned in a Man of the Match display in Munster’s bonus point victory over Benetton Rugby in their opening day victory at Musgrave Park on Friday last.

Munster make just one change to the line-up that defeated the Italians for the historic first visit of Erasmus’ former side, the Cheetahs, to Limerick.

That change sees Ian Keatley come in for Tyler Bleyendaal at out half with second row Billy Holland taking charge as captain this weekend.

Following strong showings in round one, the Greencore Munster Academy duo of loosehead Liam O’Connor and blindside Sean O’Connor retain their starting positions.

In naming a strong bench, Erasmus includes no less than five returning internationals with Niall Scannell, Dave Kilcoyne, John Ryan, Rory Scannell and Simon Zebo all likely to see their first action of the new season.

Substitute DaveKilcoyne will also make his 100th appearance for Munster should be he appear off the bench in Saturday evening’s game.