Munster's Dan Goggin to have scan on injured knee 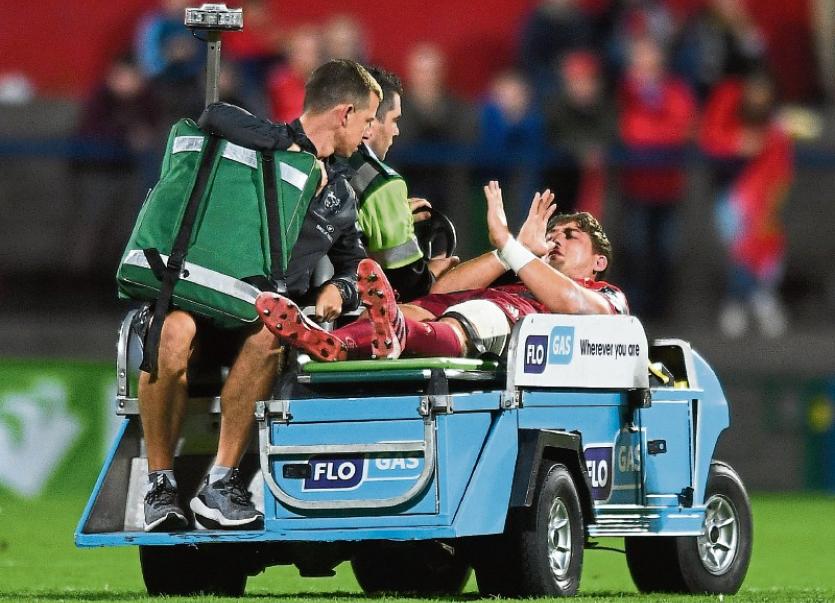 EXCITING young Munster centre Dan Goggin is having a scan on his injured knee today, Monday, with the province predicting he will be sidelined for the ‘foreseeable future.’

Twenty two-year-old Goggin sustained the injury after coming on as a second half replacement in Munster’s impressive 34-3 bonus point win over Benetton Rugby in their PRO14 opener on Friday night.

The injury is a big blow for the highly regarded Goggin who made 14 appearances for Munster last season.

Elsewhere, on the injury front, back-row Conor Oliver is another on the long term injury list having undergone surgery last week for the shoulder injury he picked up in pre-season.

Meanwhile, following a scan on the ankle injury he sustained in pre-season action against Worcester Warriors, South African Gerbrandt Grobler will meet with a specialist this week.

The weekend saw a return to action for long term rehabber Mike Sherry (back) who played his first PRO14 game since May 2016, with brace scorer Jean Kleyn (neck) and Robin Copeland (shoulder) also returning post-surgery.

Friday night also saw a Munster U20/Development side defeat their Ulster counterparts 29-21 at Thomond Park with David Johnston and the returning Kevin O’Byrne both featuring for the hosts, the latter crossing for a try.

The academy’s Calvin Nash received a knock to the sternum and continues to be monitored by the medical team.

In looking ahead to Saturday evening’s clash with the Cheetahs at Thomond Park (5.15pm), a number of the Irish internationals who featured for Ireland in their clean-sweep of wins in the USA and Japan this summer are expected to make their first appearances of the season this weekend.

Director of Rugby Rassie Erasmus will name his side for Round 2 of the Guinness PRO14 at midday on Friday.