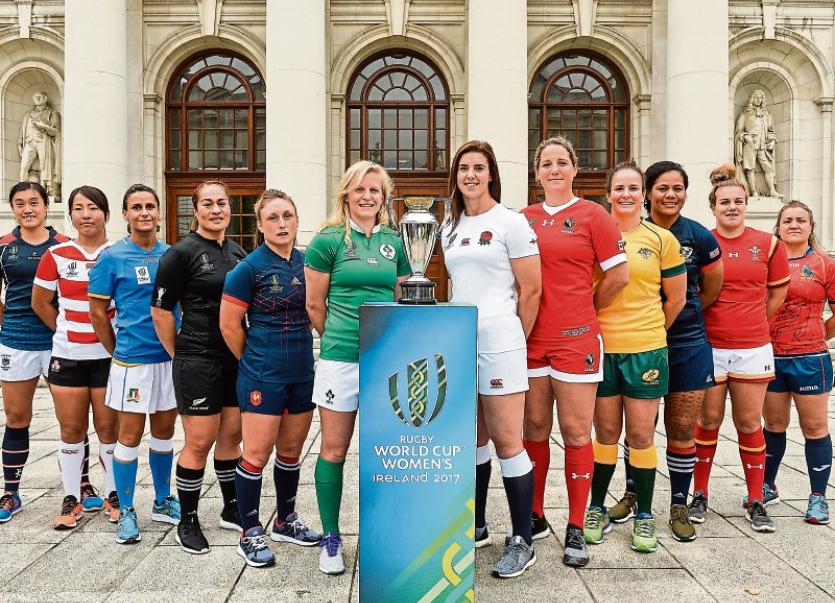 The team captains at the World Cup launch in Dublin

THE Ireland women’s team, under the guidance of their Limerick head coach Tom Tierney, begin their quest for glory at the Women’s Rugby World Cup against Australia at UCD Bowl, Dublin this Wednesday evening at 7pm.

Seven Munster players are included in the Ireland squad for the tournament.

Galvin was called into the squad to replace the unfortunate team captain Niamh Briggs who was ruled out with an Achilles injury.

The 2017 tournament will be the eighth Women's Rugby World Cup and will mark the first time Ireland has ever hosted the tournament. Ireland finished fourth at the most recent World Cup in 2014.

The pool games will be played at UCD, with the knockout stages taking place in Belfast, with Queen's University Belfast and the Kingspan Stadium set to host the tournament's latter stages.

Following Wednesday night’s Pool C opener with Australia, the Ireland women’s team take on Japan on Sunday next, 5.15pm, before rounding off their pool fixtures against France on Thursday, August 17, 7.45pm.

All of Ireland’s pool games will be televised live on RTE.

Four years after retiring, Grand Slam winner, Limerick woman Joy Neville is set to grace another World Cup - this time as a referee.

Neville won 70 caps for Ireland, captained her country and played in the 2006 and 2010 World Cups.

The tournament will be broadcast live to more than 110 countries and will be the most widely viewed tournament to date with a record broadcast and social media coverage schedule.