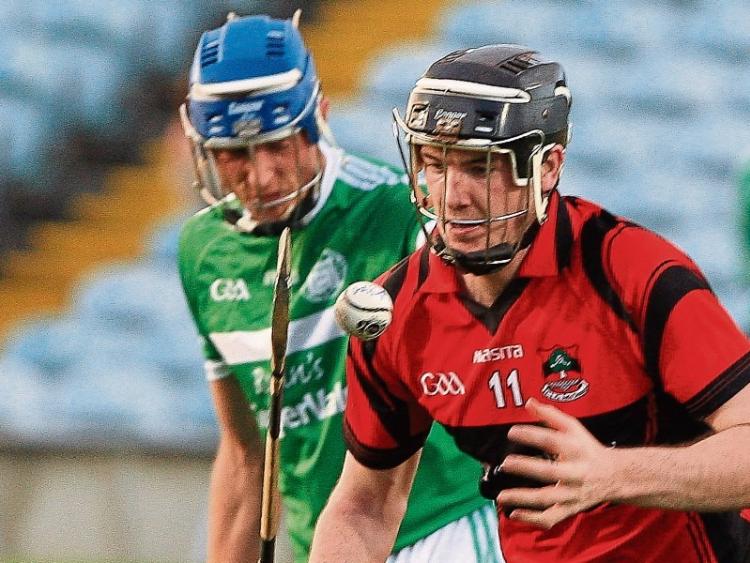 Declan Hannon in action for Adare against Kilmallock recently

THIS Sunday (7.30) in Bruff, Kilmallock play Adare in the Division One final of the Limerick County Hurling League.

Kilmallock reach the final with one defeat from seven outings – that defeat was against Adare back on April 9 in Fitzgerald Park.

Adare have lost once and drawn once – losing to Patrickswell last week, while drawing with Na Piarsaigh back in round three in mid-April.

While many league games were played without full strength sides, Sunday’s Division One final should provide an ideal pre-championship run out for both sides with Limerick SHC action on July 29-30.

The ACHL has been dominated by Na Piarsaigh and Kilmallock for much of the last 10 years. Indeed the Caherdavin club have won the last four titles and only missed out on a 2017 final spot on scoring average to Adare.

On Sunday Kilmallock will be bidding to win their second county league title of the year – last month they won the Limerick Junior A League title with a 3-23 to 5-13 final win over Feenagh-Kilmeedy.

The Balbec were ACHL winners last in 2012.

Sunday’s finalists Adare and Kilmallock are in seperate groups in the Limerick SHC, where noth are on track to reach the knockout stages. Kilmallock have three wins from three and are in line for a semi final spot, ahead of games against Ahane and Bruff, while Adare have one defeat so far and have games against Na Piarsaigh and Monaleen to come.

Two of the five titles have been decided in the Limerick County Hurling League.

Already Ballybrown and Dromcollogher-Broadford have claimed titles and indeed promotion.

Ballybrown will return to the top flight after a two year absence by virtue of their unbeaten run through Division Two with seven straight wins. There is no final in Divisions Two, Three and Four so the top team is automatically deemed league champions and promoted.

However, Doon or Granagh-Ballingarry could yet join Ballybrown in Division One next season as both Knockainey and Murroe-Boher are relegated due to walkovers.

Dromcollogher-Broadford claimed the Division Four title in dramatic style on July 4 when they drew with Kildimo-Pallaskenry, 2-17 to 1-20.

Kildimo-Pallaskenry, who were 0-13 to 0-6 ahead at half time, needed a win to secure promotion but a draw was sufficient for Drom-Broadford. Deep into injury time Ray Lynch proved to be the Drom-Broadford hero when an injury time goal, his second of the game, secured the necessary draw to clinch the title in the final minute of the final round game.

The Division Three title rests between Dromin-Athlacca and Bruree. Bruree have a game yet to play against Blackrock and need a win to snatch promotion from Dromin-Athlacca.

In Division Five there are semi finals to be played next Wednesday – Killeedy play Crecora in Mick Neville Park and Claughaun-Old Christians face Tournafulla in Croagh. Only the eventual winner of the final will be promoted.