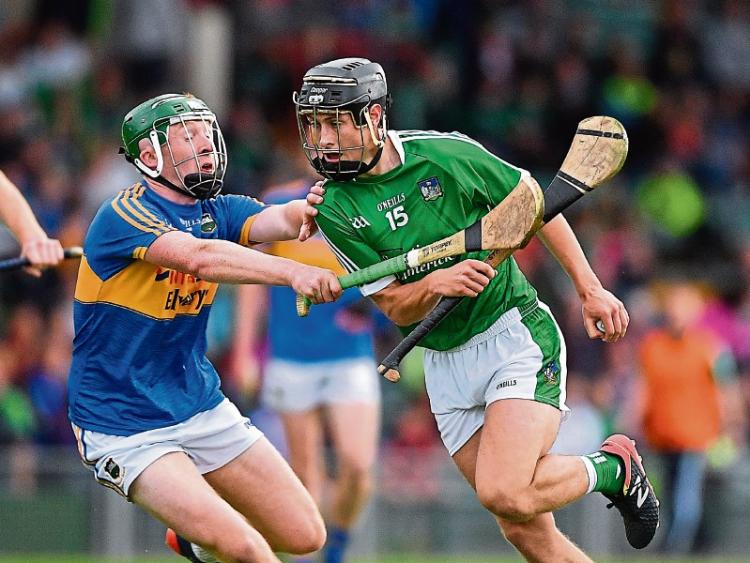 Barry Murphy of Doon in action for Limerick

LIMERICK were emphatic 11-point winners over Tipperary in the quarter final of the Munster U-21 Hurling Championship this Thursday evening in the Gaelic Grounds.

The win moves the Pat Donnelly managed side into a provincial semi final with Clare in the Gaelic Grounds on July 12.

Limerick were 2-12 to 0-8 up after playing with the gentle breeze in the opening half.

With 10 All Ireland U-21 medal holders from 2015 in the starting team, Limerick put their experience to good use in the early minutes to lead 1-4 to no score inside 10-minutes.

Colin Ryan set the early tempo in midfield and accounted for two of the opening points.

The first goal came in the fifth minute when captain Tom Morrissey bundled over the line after a Barry Nash shot was initially saved.

Ten minutes were played when Tipperary opened their account but by the mid-point of the first half the home side in the Gaelic Grounds were 1-6  to 0-2 clear.

Then just in the 16th minute came the second goal – Barry Nash shrugging off a challenge to turn and head for goal before finishing confidently with shortened grip.

Ronan Lynch, Aaron Gillane and Barry Murphy all hit points from play to move that advantage out to 10-points by half time, despite six wides in front of 3,076 and the live television audience of TG4.

In was a half in which Tipperary played an extra man in defence but still Limerick had seven scorers from play.

On the change of ends, Tipperary asked questions of Limerick with the five of the opening six points.

But the Limerick answer came in the shape of six unanswered points within an eight minute spell to move 2-19 to 0-13 clear with 12-minutes to play. The first four points were from Gillane (three frees) – he ended with 0-9 (7frees).

Limerick saw out the 11-point win with points from Casey and Paudie Ahern.