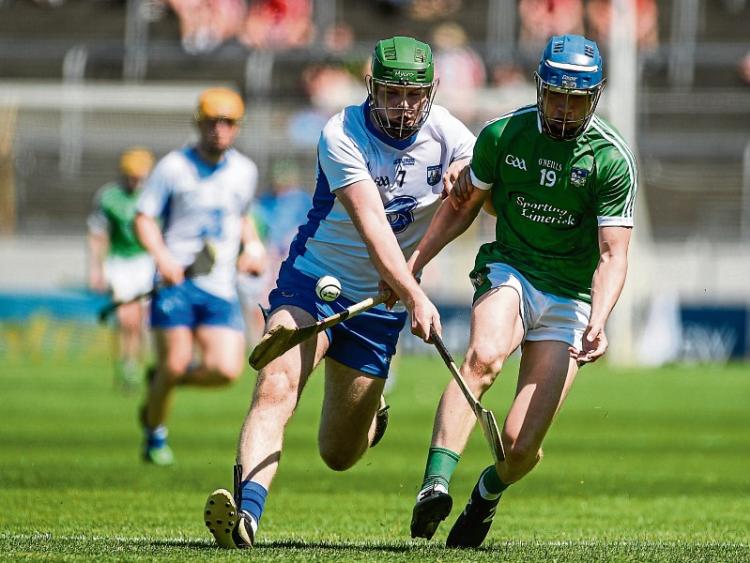 LIMERICK were crowned Munster U-25 Hurling champions this Sunday in Thurles. A

A hat-trick of goals from Oisin O’Grady powered Limerick to victory in the first ever provincial U-25 competition.

The final was played Sunday as the curtain-raiser to the Munster SHC semi final between Cork and Waterford in Semple Stadium.

Limerick beat Clare to reach the final of his new competition, while Waterford received a bye to the decider as Cork and Tipperary didn’t enter. The Limerick U-25 team was under the guidance of the Limerick U-21 hurling management and only U-21 players were considered for the U-25 team. But as Limerick play Tipperary in the Munster U-21 Hurling Championship onThursday evening, a large number of players were rested for this U-25 final.

Nonetheless Limerick scored a two point win in the splendid sunshine of Thurles.

With Thursday’s U-21 tie in mind, manager Pat Donnelly sent out a team with just four survivors from the semi final win over Clare.

It was one of that quartet Oisin O’Reilly that scorched three goals to help inspire Limerick to the provincial title.

Waterford led 0-13 to 2-6 at half time. It was a half where Limerick were backed by a gentle breeze but hit six wides, compared to three for The Decies.

Six level times over the 30-minutes, five of the last six points ensured the half time lead for Waterford.

Waterford also hit four of the opening five points to lead 0-4 to 0-1 after seven minutes of play – Seamus Flanagan opening the Limerick account in the sixth minutes.

The first of the Limerick goals came in the eighth minute – Oisin O’Reilly intercepting a handpass in the Waterford defence, 23-metres from goal, and tearing towards goal before finishing to the net.

Mikey Mackey, Jack Cagney and Conor O’Grady and Seamus Flanagan followed with points and Limerick led 1-5 to 0-7 with 17-minutes played.

Then came the second Limerick goal – Kyle Dillon responding fastest when a Flanagan shot for a point came back into the goalmouth of the post.

That goal had Limerick 2-5 to 0-7 clear with 18-minutes played. But from here to half time was mostly Waterford with five points in a row before a Dillon free had the game level, 2-6 to 0-12.

It was a half in which Cormac Curran and Jack Prendergast each had three points from play for Waterford.

On the change of ends, Limerick had to reply on Kyle Dillon frees in the early minutes as Waterford led 0-16 to 2-8 with 10-minutes gone in the half.

Sub Lorcan Lyons had the first Limerick score from play after 12-minutes but Waterford were still ahead 0-17 to 2-9 with just over 10-minutes to play.

Then came the second O’Reilly goal to put Limerick ahead.

Alas, within a minute Waterford had a goal of their own – Shane Ryan replying instantly.

But Limerick weren’t finished and four minutes later Kilmallock’s O’Reilly had his hat-trick and Limerick were 4-9 to 1-17 ahead.

Waterford hit back but then needed a goal from an injury time 21-metre free but the effort from goalkeeper Billy Nolan crashed over the crossbar as Limerick held on for silverware.