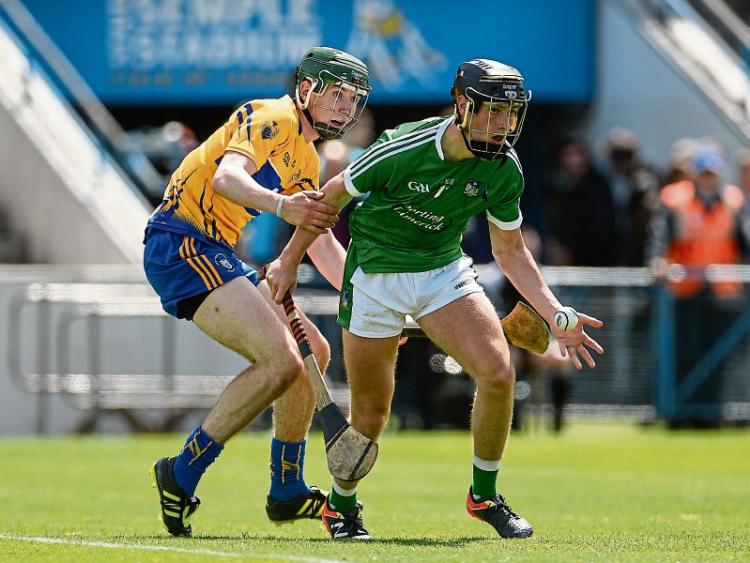 LIMERICK won the curtain-raiser in Thurles this Sunday with a 4-17 to 0-16 win over Clare in the semi final of the new Munster U-25 Hurling Championship.

A hat-trick of goals from Killeedy’s Paudie Ahern helped the Pat Donnelly managed Limerick to advance to play Waterford in the final – no date is confirmed.

Limerick lined out with an entire U-21 team – boosted by the late inclusion of senior panellist Ronan Lynch.

Limerick were 1-10 to 0-8 ahead after playing with the gentle breeze in the opening half.

Robbie Hanley and Kyle Dillon opened the scoring but it was Clare that were 0-4 to 0-2 clear on 12-minutes.

The sides were level for the second time when 0-5 each on 18-minutes with Barry Murphy and captain Thomas Grimes on the mark from play.

Then came the Limerick goal – Paudie Ahern crashing high to the net in the 19th minute.

The Pat Donnelly managed Limerick were to end the game on top with Murphy and Lorcan Lyons on the mark from play and Dillon and Ronan Lynch scoring frees. It was a half that saw Clare captain Shane McGrath account for six of their scores, four from frees.

A second Paudie Ahern goal had Limerick 2-14 to 0-9 ahead after 10-minutes of play in the second half.

Then in the 41st and 43rd minutes the game was all but sealed with a Mikey Mackey goal and a third for Ahern.

Limerick were to end with nine different scorers while Clare were reliant on Shane McGrath.