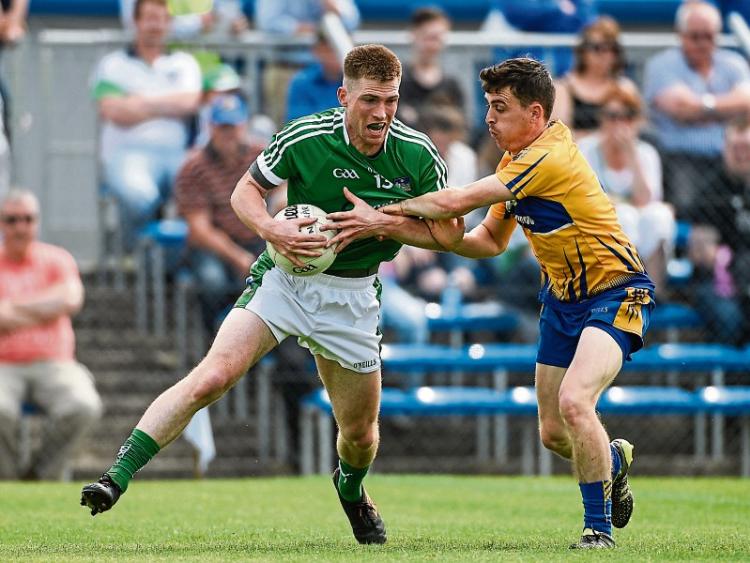 DEFEAT was Limerick’s lot in the quarter final of the Munster SFC this Sunday in Cusack Park, Ennis.

Limerick now await round one of the All Ireland SFC Qualifiers on June 14, while Clare advance to a semi final meeting with Kerry in the provincial championship.

Limerick trailed for much of the game but staged a late late fightback with 1-1 from teenage sub Josh Ryan in injury time.

The all-important goal came after just nine minutes when Eoin Clearly profited from a Jamie Malone pass. Cleary held off Daniel Daly and then rounded the advancing Donal O’Sullivan before kicking to an empty net.

Seamus O’Carroll, from a superb sideline, opened the Limerick account on four minutes.

It was 12-minutes before the opening Limerick point from play – Danny Neville finishing from the left.

But Clare were punishing Limerick turnovers and getting their scores easier.

Regardless a James Naughton point on 21-minutes maintained the gap at three points.

With 10-minutes to the break the lead was still the goal.

But it was Clare that finished the half on top to lead by five points at the break.

There was to be just one point in the opening 15-minutes of the second half – Eoin Cleary scoring after 17-seconds!

Danny Neville hit back for Limerick in the 16th minute to leave five points between the sides as the game entered the final 15-minutes.

Then the scores started to flow.

Sean O’Dea, Seamus O’Carroll and Iain Corbett had Limerick points to reduce the lead to four points with 10-minutes to play.

Eoin Cleary from play and from a free, either side of another from O’Carroll, had Clare 1-13 to 0-11 clear with five minutes to play.

Then came the scoring burst from Josh Ryan but it wasn’t to be for Limerick on a day when Clare had 14 wides and Limerick eight.