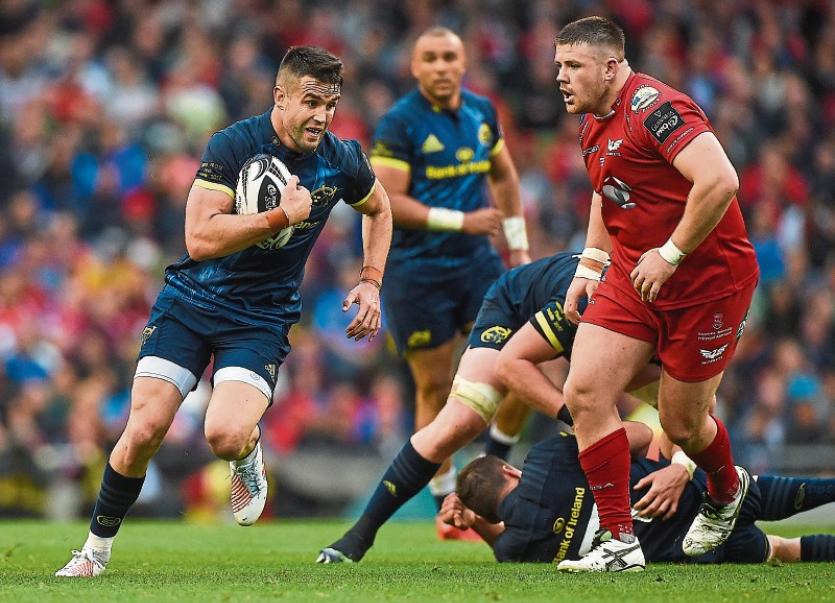 MUNSTER’S dream of claiming a fourth Guinness Pro12 title – and first in six seasons – were shattered in a 46-22 thumping at the hands of a rampant Scarlets side at the Aviva Stadium on Saturday evening.

A dominant Scarlets side, repeatedly cut the Munster defence to ribbons in the opening half, to score four terrific tries and build a commanding 29-10 half-time lead over the pre-match favourites.

Munster fans were shell-shocked and once Scarlets out-half Rhys Patchell increased the their lead with a 45th minute penalty goal, the Welsh region were on their way to a second Pro12 title.

This record defeat was a hugely disappointing way for Munster to sign off on an emotional season with the sudden passing of head coach Anthony Foley in October.

It was also not the way the likes of the departing Donnacha Ryan, Francis Saili and Jean Deysel would have liked to end their time in a Munster jersey.

This was Munster’s second heavy defeat in a PRO12 final in three years following their loss to Glasgow Warriors in Belfast two years ago.

A clinical Scarlets side, who had scored a comprehensive semi-final win over Leinster also in Dublin seven days earlier, were winning the title for the first time since their only success in 2003/04.

Munster, long odds-on favourites at 2/7 with the bookies to win the final, made the perfect start when out-half Bleyendaal landed a sixth minute penalty after Scarlets were penalised at scrum-time and then a further 10 metres for dissent.

However, the Scarlets hit back strongly and the Welsh region scored the opening try of the game when out-half Rhys Patchell played a neat grubber kick in behind the Munster cover for winger Liam Williams to touch down.

Patchell was off target with the difficult conversion from the touchline, but he did add an 18th penalty before the Welsh region struck for a second try.

A terrific turnover helped Scarlets earn favourable field position and neat interplay of passes saw Steffan Evans, who was only cleared to play during the week following his red card against Leinster, cross for a smashing second try.

Munster’s defence, the best in the Pro12 all season, was in tatters and a composed Welsh side made them pay again in the 28th minute when scrum-half Gareth Davies bagged a third try.

Scarlets were bossing the breakdown and their ability to threaten from all parts of the pitch left Munster bewildered. The Welsh region didn’t commit any great numbers to ruck, instead opting to fan out across the pitch when defending.

Ex-Leinster Academy player Tadhg Beirne barged over for a fourth Scarlets try from close range before the half hour mark, with Patchell’s conversion making it 29-3. Munster looked a beaten docket.

Munster desperately needed to respond before half time and the three-time league winners scored a try just before half time through out-half Tyler Bleyendaal, following a powerful surge from the scrum. Bleyendaal’s conversion meft it 29-10 to the visitors at the break.

Munster needed to score first in the second half. Simple as that. However, it was the Scarets who notched the first points of the period through another Patchell penalty goal.

Scarlets controlled the second half, closing Munster down in attack. The Irish province was forced to chase the game and it was always going to be difficult in greasy conditions and with the Scarlets defence imperious.

The Welsh region grabbed a fifth try in the 70th minute when replacement DTH van der Merwe flew over for a fifth try.

Munster did a small degree of respectability on the scoreboard late on wingers Andrew Conway crossed for two late tries for the home side.