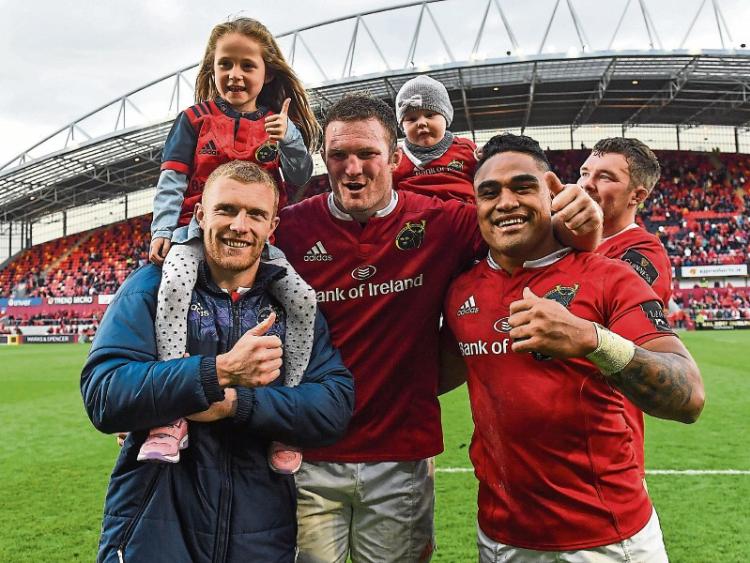 Munster's Keith Earls, left, with his daughter Ella May, Donnacha Ryan, Francis Saili and Peter O'Mahony and his daughter Indie after Saturday's Guinness Pro12 semi-final win over the Ospreys

MUNSTER will set their sights on a fourth Guinness Pro12 title when locking horns with the Scarlets at the Aviva Stadium on Saturday evening, 6.15pm.

Munster produced a storming second half display to ease past the Ospreys 23-3 in their semi-final clash played before more than 18,000 spectators on Saturday last. The game was both Donnacha Ryan and Francis Saili's final outings in a Munster jersey at Thomond Park before both depart the province this summer.

Thirty three-year-old Ryan, who heads to Racing 92 in the Top 14 next term, has made 166 appearances for Munster since making his debut against Ospreys in September 2004

Afterwards Shannon clubman Donnacha Ryan said: “It was great today. There has been a lot of emotion the whole year. Sometimes you get caught up in stuff which is external to what is going on on the pitch.

“To be fair we stuck to the task this week. The result in the Champions Cup semi-final with Sarries was obviously disappointing, but I think we stuck to our plan a lot better this week and it was great to get a win today.

“This place means everything to me. I got to play with my heroes coming in here to Munster. I spent my whole adult life here. Now I am leaving here I look down on these guys with so much pride. You have helped with their career, their development and their lives. I am so pleased for them.

”When you are in the twilight stage of the career like I am, you appreciate what the older lads did for me and I know when these guys get to that stage as well, they will too.

“These are our young heroes now. I look up to them tremendously and I look forward to following and supporting them in the years to come. We still have a lot of work to do during this week. We will take it one day at a time.

"We are constantly building momentum and it would be great to win it, but we saw the Scarlets do a tremendous job on Leinster on Friday and they did a job on us at home a few months ago.”

Scarlets will get to wear their red playing strip in next Saturday's Pro12 final, while Munster Rugby will be in their navy playing kit

However, Munster will occupy the home side's dressing room for the big final.