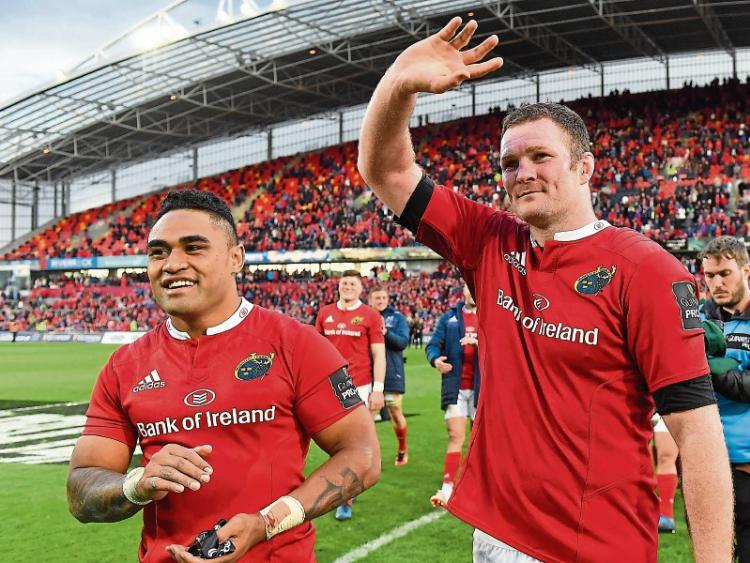 A storming second half display helped Munster see off Ospreys and advance to next Saturday’s Guinness PRO12 final against Scarlets in Dublin’s Aviva Stadium.

This semi final finished 23-3 in a fitting finale to the Thomond Park careers of Donnacha Ryan and Francis Saili, who capped a memorable send-off with a Man of the Match display.

It was Saili’s first half try that had Munster 8-3 ahead at the break.

The 25th minute try from the centre, came after fine work from Rory Scannell.

The game’s scoring had been opened in the seventh minute when Dan Bigger kicked a penalty for the Welsh side after Munster were penalised for being off-side. It was to be the only score for the visitors to Limerick.

Tyler Bleyendaal struck the upright with the conversion after Saili’s try but he did have the final say of the half when converting a penalty in the final exchanges of the opening half.

In front of 18332, it is a much different second half from Rassie Erasmus’ side.

The second half will be long remembered for a Simon Zebo try. Keith Earls, Saili, Conor Murray and Andrew Conway all played their part in a smashing team try, finished by the full back to move Munster 13-3 clear.

Bleyendaal added the conversion and Munster were 12-points clear with less than 20-minutes to play in the semi final.

In the 66th minute, Bleyendaal added a second penalty and Munster edged closer to the final.

The final spot was sealed six minutes from time when Andrew Conway had the third Munster try to end a commanding second half display and confirm a 20-point semi final victory.