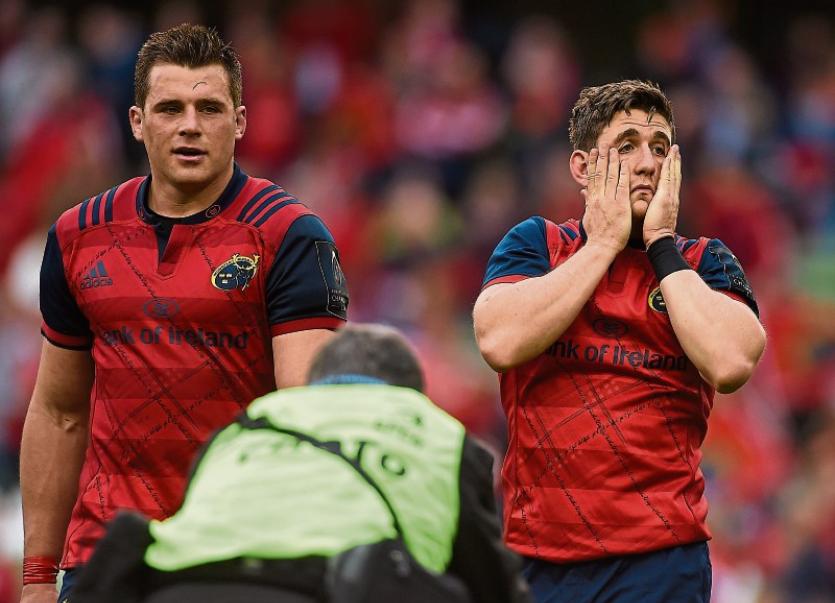 MUNSTER’S dream of reaching a first European Champions Cup final in nine seasons were crushed by a powerful Saracens side on a 26-10 scoreline in their mammoth semi-final showdown at a sold-out Aviva Stadium on Saturday.

Munster trailed 3-6 at half-time despite dominating possession and territory for long stages in a titanic opening period.

Saracens defence had been excellent during that opening period, and the Aviva Premiership champions – boasting five British and Irish Lions in their pack alone – overpowered their hosts in the second period once prop Mako Vunipola powered his way over for a third quarter try.

Munster had no answer to Sarries power game as the ruthless 2016 double winners consigned their opponents to a fifth successive Champions Cup semi-final defeat.

Munster’s lack of cutting edge in attack, especially in the opening half when the home side enjoyed the lions share of possession, proved crucial.

The stark reality is that Munster managed to score just three points through the opening 79 minutes of the game.

The European Cup has tended to be dominated by dynasties since its inception and this appears to be turn of 2015 Champions Cup and Aviva Premiership champions Saracens to dominate. It will take a good side to stop them making it back-to-back titles next month.

When the bitter pain of defeat has eased, Munster players, management team and supporters will appreciate how much progress the team has made this season. That shouldn't be forgotten. Munster have much to build on.

Munster will be determined that their season doesn’t end here. The province is still well placed to win a Guinness Pro12 title.

Roared on by their enthusiastic hoard of supporters. Munster made the better start and Bleyendaal kicked the home side into an early lead.

However, an Owen Farrell penalty on 16 minutes levelled the score at 3-3.

Munster gained numerical advantage on 23 minutes when flanker Jackson Wray was yellow carded for a a high tackle on Duncan Williams.

Munster opted for a kick to touch rather than having a kick for goal from the resultant penalty. However, Sarries defended the situation superbly despite being down to 14 men and succeeded in clearing their lines.

Neither side had conceded a try in the opening half of their seven Champions Cup fixtures this season and that trend continued in this teak tough contest.

Munster failed to score any points in Wray’s absence and soon after his return, Sarries were awarded a scrum penalty on the home side’s ‘22 and Farrell landed the kick.

Saracens maintained their 6-3 advantage until half-time as Munster were unable to build any real momentum or create any line-breaks.

You wondered what toll the effort the first half had taken out of the Munster legs. Three points was scant reward for all that endeavour.

Saracens enjoyed a greater share of possession as the clock ticked through the third quarter and put Munster under huge pressure cranking up their power game.

Saracens energy and power told when, following a line-out deep inside the Munster ‘22, Mako Vunipola wormed his way over from close range. Farrell converted and suddenly the Aviva Premiership giants led 13-3.

Resilient Munster fought back and earned a penalty in the 58th minute, but Bleyendaal’s effort from 30metres out slid right and wide.

Farrell kicked the premiership side 16-3 to the good after 63 minutes after Munster were penalised at scrum-time. Munster’s resolve was broken and Chris Wyles bagged a second Sarries try in the 71st minute.

Farrell also added a 75th minute penalty to increase their lead. Munster did gain a consolation score in the final minute of the game when CJ Stander powered over from close range following a quickly taken tap penalty.

Replacement Ian Keatley duly added the extras to give the scoreboard a healthier look from a Munster perspective.