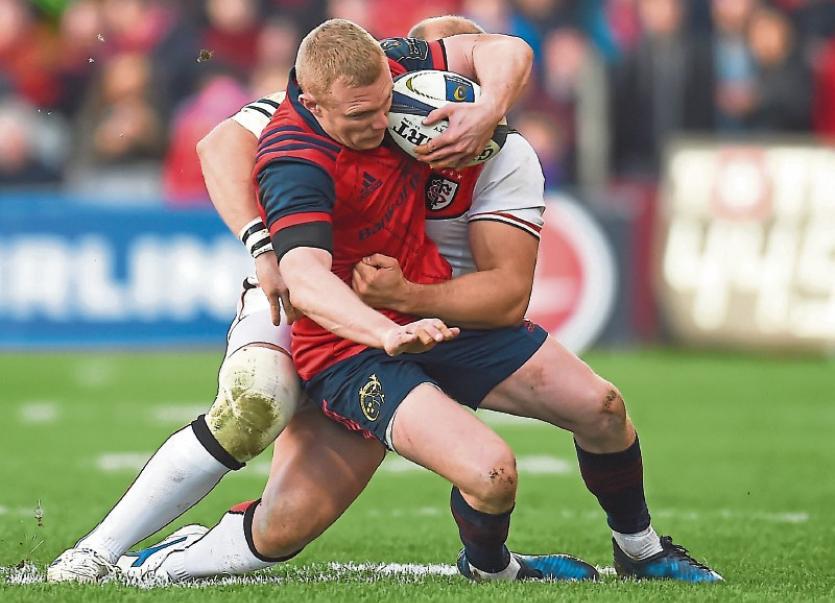 NINE years have passed since Keith Earls was parachuted onto Munster's bench for their 2008 Heineken Cup final clash with Toulouse in Cardiff as a raw 20-year-old.

In the intervening period, the kid has grown up.

Saturday will be his fifth time to play in a European Cup semi-final - Earls has been on the losing side on all four previous occasions the province has reached the last four stage of Europe's premier club rugby competition.

Earls said: “This would be the fifth semi-final on Saturday. It was a weird one, starting out and going onto the bench straight away for my first European game (2008 final), obviously I didn’t get a run in the final.

“Munster had unbelievable years, getting to semis and quarter-finals. It just brings it back down to earth how hard the competition is now, and how hard the lads train, how much the sacrifices they gave up years ago.

“I suppose that is built into us now a small bit. It’s great to be here.”

So having lost each of their last four semi-final appearances in Europe, have Munster developed an unwelcome mental block when it comes to winning last four fixtures or is it simply a matter of the opposition being better on the day?

Earls said: “It’s the opposition, I suppose pressure would have got to us a couple of years ago. The pressure with everything, with being favourites.

“We would have won a lot of quarter-finals handily, we would have won group stages handily. I'm not saying we fell in love with ourselves but you wouldn’t be as challenged as you would in a semi-final or a final.

“We’ve had plenty of games this year where we have won with the last kick of the game, and won games we shouldn’t have won, so hopefully we can get a result at the weekend.”

Earls says he has found a good balance in his life between being a professional rugby player and being a husband and father off the pitch.

"I suppose with the amount of rugby I'd played, I had to adapt my training, gym wise, and adapt as a man, becoming a father.

“I'm loving every minute of everything at the moment, I've definitely found a good balance in my life, whereas years ago it would have been all rugby, but now I'm gone more to the other side.

“I'm a father, I'm a husband, then I'm a rugby player, that's something I've picked up on the last 18 months.

“When I was breaking through, I thought I probably had to be like the older lads. I suppose when I came into the group first I was young for a couple of years.

“I broke through in 2007/08 and Conor (Murray) and (Mike) Sherry and the boys broke through in 2011 and I had to be in a squad with men that were having kids for a couple of years and I got mature quite early at a young age and I learned a lot off the ROGs (Ronan O'Gara) and the Paulies (O'Connell) and the Dougies (Howlett) but the lads who have come in have brought me back down to my age nearly and I’m a lot more relaxed.

“It’s brilliant to be back in a semi-final. It’s been three or four years now and from where we were last year, it was tough place trying to qualify for this tournament, not to mind being in a semi-final this week.

“You always had your people who would support you but it’s gone through the roof again, flags everywhere and there’s red everywhere and everyone’s looking for signed jerseys and it’s brilliant for Munster and the lads who played in the past to see this crop of lads keep things going.

“If I was sitting here five or six years ago, I’d never have thought I would have been a senior player not in motivating fellas but getting fellas going for a semi final and I’m here now at age 29 and it’s great to be here and it’s our group and squad and it’s nothing got to do with fellas from 10 years ago, so there’s great satisfaction in that that we’re stepping up and doing what they’ve done.”

So what kind of a challenge will Saracens bring this weekend?

“They’re equipped with world-class talents all over their squad. It’s definitely going to be the hardest challenge of the year. And definitely a game we have to have our best performance if we want to be beat them.”

Earls is hoping it's a case of fifth time lucky. Roll on 3.15pm on Saturday.