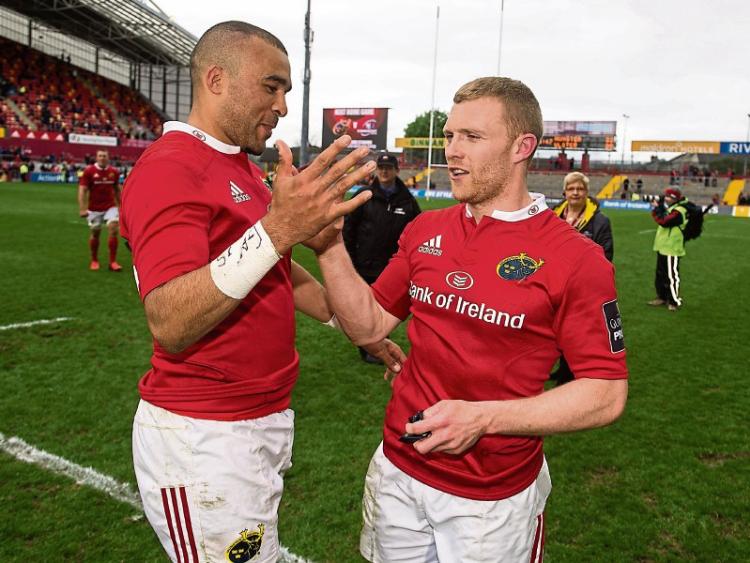 MUNSTER try scorer Keith Earls says the side’s mental strength has been a key factor in their impressive run this season.

Munster will appear in their first European Champions Cup semi-final in three seasons next Saturday when the province host Saracens at the Aviva Stadium.

Munster also secured their place in the semi-finals of the Guinness Pro12 with an exciting 22-20 victory over Ulster at Thomond Park on Saturday.

Second-placed Munster will also hope to book a home fixture in the play-off from their remaining two regular season fixtures against  Treviso, away, and Connacht, home.

Asked how Munster were able to dig out a result against Ulster despite falling behind four times during the interprovincial game, Earls said: “I dunno, to be honest with you. The boys always seem to pull it out towards the end. We have done it all season.

“I suppose when teams look at us they know we will go for the 80 minutes, but Ulster are a quality side and we knew that our defence was going to be under pressure and they scored some good tries.

“I think our mental strength to get back into it will go a long way.

“This was the ideal fixture for us, really, heading into the Champions Cup semi-final with Saracens next week, playing a side as good as Ulster.

“We had a couple of changes from last week. We are just delighted to get the win and it is an important part of the season now the next few weeks.”

Earls was quick to acknowledge Francis Saili’s part in the lead up to the winger’s second half try.

“It was good, grand, it was all Francis with his twinkle toes. I think it was my first try of the year for Munster, so it was good to get it.”

Earls was also quick to deflect any talk of him being named in a second Lions squad, following his call-up eight years ago. Warren Gatland will name his Lions squad to tour New Zealand on Wednesday.