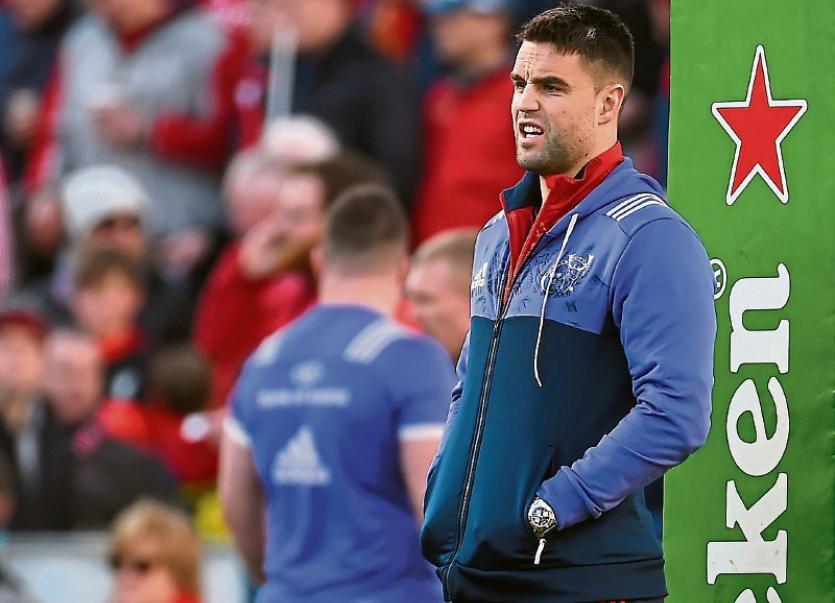 Murray has been troubled with a shoulder injury picked up while playing for Ireland against Wales in the 6 Nations in mid-March.

While Erasmus is upbeat about CJ Stander’s prospects of overcoming an ankle injury in time for next Saturday’s clash with Saracens at the Aviva Stadium, he is not as optimistic over Murray or centre Rory Scannell who picked up an injury in the province’s dramatic 22-20 win over Ulster at Thomond Park this Saturday.

Erasmus said: “Rory (Scannell) went off with his ankle. He went off and I think it’s pretty serious.

“We’ll have to check it in the next 24 hours and we’ll probably only have clarity on that on Monday, but Rory wouldn’t come off, especially because we didn’t have a backs sub on the bench. I can’t tell you now but he would be a big worry.”

“Conor (Murray), I’m not sure. He’s not healing like we would have liked him to heal. It’s slower and I think he will be a big doubt for next week.”

Munster were forced into a change at scrum-half for the Ulster game prior to kick-off as Duncan Williams, who was named in the starting team, picked up a knock and was replaced by Angus Lloyd.

Erasmus explained: “Duncan (Williams) pulled up yesterday (Friday) with his groin in the captain’s run. We wanted to win this game desperately to have some breathing space in the Pro12, so if Duncan was fully fit we would have played him.

“I don’t think Duncan is a doubt (for Saracens), that’s why when he pulled up yesterday it was mostly precautionary. If it was the Saracens game this week, Duncan would definitely have played.”

Munster made a second change to their selected team before kick-off when Tyler Bleyendaal was included on the bench rather than starting the game due to an upset stomach. The New Zealander was introduced as a replacement early in the second half.