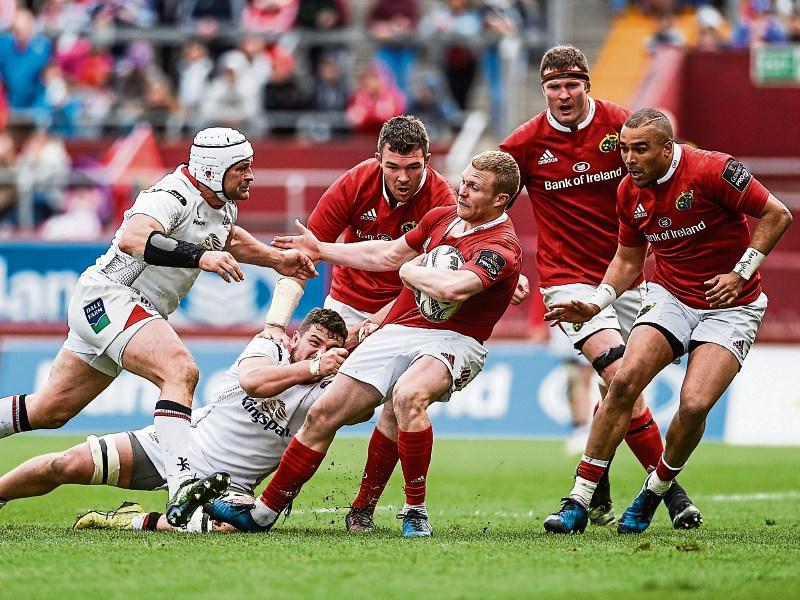 MUNSTER secured their place in the Guinness Pro12 play-offs are securing a thrilling 22-20 win over Ulster at Thomond Park on Saturday.

Munster completed a home-and-away double over their Irish rivals this season to also move within touching distance of a home semi-final with now just two series of regular season fixtures to come.

Munster were forced to re-jig their side before kick-off with scrum-half Duncan Williams a late withdrawal due to a tight groin. Williams was replaced by former Ulster player Angus Lloyd, while out-half Tyler Bleyendaal, originally named in the starting line-up, was switched to the replacements bench with Ian Keatley coming into the starting team.

Munster suffered a blow inside the opening minute when winger Darren Sweetnam went off injured to be replaced by Andrew Conway. And Munster’s injury worries were also added to in the second half when centre Rory Scannell needed to be helped off after picking up an ankle knock.

Ulster made the ideal start when captain Rory Best was credited with the touch down following a well-executed maul inside four minutes. Jackson converted for 7-0.

Back came Munster however, and followed a good break up the right touchline, involving captain Peter O’Mahony and winger Keith Earls, scrum-half Angus Lloyd showed great composure and strength to touch down.

Keatley duly added the extras. The see-saw nature of the continued in the 13th minute when a Jackson penalty helped the visitors into a 10-7 lead as the action-packed nature of the game continued.

After a spell of concerted pressure, Munster drew level in the 37th minute when Keatley kicked his opening penalty goal of the day after Ulster were penalised at scrum-time.

The sides finished the opening half locked at 10-10. However, Ulster regained the lead on 50 minutes when Jackson landed his second penalty goal from in front of the posts.

Munster hit back with their second try shortly after the hour mark and what a score it was. Francis Saili, out of contract at the end of the season, used his dancing feet to create the score, leaving several would-be tacklers for dead before sending winger Earls into the clear.

The winger showed great strength to score. Replacement Bleyendaal was narrowly off target with the conversion attempt.

Munster’s 15-13 lead was short-lived however as Luke Marshall dotted down two minutes. Jackson’s conversion made it 20-15 to the visitors.

However, a lare try from Dave O’Callaghan, converted by replacement Bleyendaal ensured a precious victory for the home side.