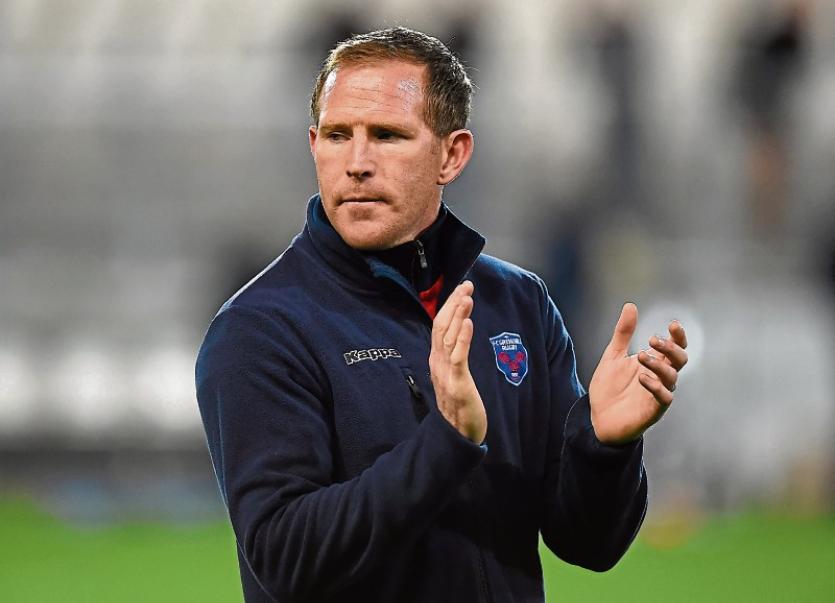 FORMER Munster scrum-half Mike Prendergast has experienced quite an eventful couple of weeks.

Limerick man Prendergast will take joint charge of Grenoble in the French Top 14 until the end of the season following the departure of head coach Bernard Jackman from his post.

And more recently, Prendergast was confirmed as the new attack coach at French Pro D2 leaders Oyonnax next season. Prendergast will be in Limerick this weekend to attend Munster's glamour European Champions Cup fixture with Toulouse at Thomond Park.

When did you know Bernard Jackman was leaving?

Mike Prendergast: “We only found out about Bernard literally a day after the defeat to Bordeaux. That came as a big shock to be honest with you.

“That left just three coaches, myself, Aaron Dundon and Philippe Doussy, our skills coach, in charge as such.

“It was a bit of a shock and of course a lot of stuff has been happening over the past two weeks which have been quite difficult here with everything that has been going on.

“A lot has landed on the desk, I suppose. But look we have had to deal with it. Two weeks ago we drew with Toulon, we were 17 points behind.

“That has helped the atmosphere around the place as well. Then last weekend we beat Castres 21-20.

“Our goal is obviously to try and stay in the Top 14 which we will be hard. Two teams go down and we are 11 points behind Stade.

“There is talk that maybe there could be points deducted from the recent so-called 'fusion' or merger, but that didn't happen and their game was called off, so there is talk of that. All I and the other staff can do is focus on what is happening on the pitch, prepare the lads. It has been a tough two weeks, a crazy experience.”

When did you decide on your move to Oyonnax?

MP: “I made decision made to join Oyonnax about four weeks ago. I just felt I had four years done at Grenoble, it was probably time to move on.

“Oyonnax contacted me and they have a really, really good project going forward, so there were a couple of options. I had options to stay in France and an option to go to England, but to be fair, what Oyonnax sold for me was a right fit for me at the time.

“I am glad I have made that decision as well, no regrets. I have my job of work to finish here and as I said , not just myself but the staff and the players, want to keep Grenoble up.

“I have had a really good four years. This year has obviously been difficult for a number of reasons, but it has been a really, really good experience here and I just felt it was the time to move on. I was coming off contract obviously as well.

“Oyonnax have a very, very good set-up over there. They have a new state-of-the-art new training facility, not too dissimilar to what Munster have put in at UL, everything under the one roof as such.

“The rugby team is the only show in town in that there isn't a huge amount going on there. Rugby is everything over there.

“The facilities Oyonnax have, the squad and potential squad and also the staff they put in place. Jamie Cudmore, who is well known to Munster fans from his day with Clermont, is forwards coach, and they have the French defence coach coming in.

“Oyonnax had a big win last week against Agen who were second. They beat them away, 25-21. There's five games left, three away, two home. Hopefully, they can secure the automatic spot to go up to the Top 14.

What have you made of Toulouse this season?

MP: “Up there we (Grenoble) had a difficult day. They played quite well against us. They started the season quite well. Recently, they have only won one out of their last six Top14 games which was at home two weekends ago.

“I know three years ago Toulouse were over at Thomond Park for a Heineken Cup quarter-final to play Munster. I think they have actually regressed since then. They are a team which has struggled for form.

“The players they have on their books, especially recently, they are 11th on the list of try-scoring teams in the Top 14. They are struggling to score tries.

“Their defence is quite good, the set-piece is quite strong and they have good ball carriers. They lack that bit of structure that may be needed.

“Traditionally they are a team which played an off-loading game, but if you can negate that and I'm sure Munster will look to do that, you take a lot from their game.”

Their back three is traditionally a potent weapon?

MP: “Their defence is quite good, the set-piece is quite strong and they have good ball carriers. They lack that bit of structure that may be needed.

“Traditionally, they are a team which played an off-loading game, but if you can negate that and I'm sure Munster will look to do that, you take a lot from their game.

“They have a dangerous back three which Munster need and I'm sure will be very aware of. You cannot kick loose ball to their back three because you have guys like Maxime Medard, Yoann Huget, who we know plays with France, Alexis Palisson, who can cause problems and you have a guy like Gael Fickou who had a decent enough 6 Nations.

“Traditionally Toulouse, out of the French you would have been looking at 9, 10, 11 Toulouse names, but there is only 2-3 starters at the moment and 2-3 on the bench. That shows where they are at the moment.

“They are a club not making massive profits these days. Crowds are down. But the only thing is and I will say this when I speak about them it sounds quite negative, but French clubs can turn up. Thierry Dusautoir's has announced recently he is going to retire at the end of the season. Potentially he is looking at his last Champions Cup campaign. He has been a massive leader.”

What is your prediction for Saturday's quarter-final?

MP: “If Toulouse turn up they will perform. I do think Munster will have too much intensity in their game which they showed in abundance this season.

“If you look at Toulouse, a guy like Louis Picamoles gone out of the team this season, he's now with Northampton, that has taken a lot from them and they still haven't settled on half-backs.

“Bezy is settled at 9, but they can't appear to decide whether to start Jean-Marc Doussain who struggles with consistency at 10, Luke McAllister, Toby Flood, it hasn't rally been happening for them this year.

“But if things bounce their way they can be dangerous, but I do think Munster's intensity will be right up there.

“From a conditioning point of view, I think the Munster bench can make a big difference near the end. I can see Munster finishing the game quite strong as well.”

Can Munster win the Champions Cup and Pro12?

MP: “The good thing about Munster is that everyone will dread playing them. Straight away there are putting that fear into teams that maybe hadn't been there in a couple of years.

“They fight tooth and nail for everything. Culturally they are very much together. To do it on two fronts is a big, big ask, injuries will tell a bit.

“I definitely think they can win silverware. I'm not sure they can do it on two fronts. I think the Pro12 probably is the better chance.”